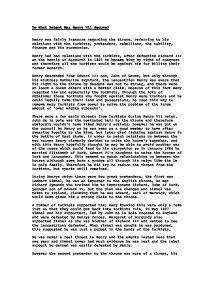 To What Extent Was Henry Vll Secure?

To What Extent Was Henry Vll Secure? Henry was fairly insecure regarding the throne, referring to his relations with the Yorkists, pretenders, rebellions, the nobility, finance and his succession. Henry had bad relations with the Yorkists, after defeating Richard III at the battle of Bosworth in 1485 he became king by right of conquest and therefore all the Yorkists would be against him for killing their former monarch. Henry descended from Edward III son, John of Gaunt, but only through his mistress Katherine Swynford, the Lancastrian Henry was aware that his right to the throne by descent was not to strong, and there were at least a dozen others with a better claim. Because of this fact many resented him and especially the Yorkists, Through the Acts of Attainder those Yorkists who fought against Henry were traitors and he could legally take their land and possessions, he used this way to remove many Yorkists from power to solve the problem of the large amount of 'over mighty subjects'. There were a few early threats from Yorkists during Henry VII reign. John de la pole was the nominated heir to the throne and therefore obviously wouldn't have liked Henry's actions; however he was put on the council by Henry as he was seen as a good member to have after swearing loyalty to the king, but later died fighting against Henry in the battle of East Stoke. ...read more.

What happened here shows just what they think about the king by killing his representative, the earl of Northumberland. The War of the Roses effectively is still present, as the leader of the rebellion was a Yorkist so was probably just using the subsidy as an excuse to rebel against Lancastrian rule. The second rebellion was the Cornish rising of 1497 when a tax was introduced to pay for the war against Perkin Warbeck and the Cornish thought why should they have to pay to defend the North at Warbecks attack from Scotland? The rebels march through England and there are 15,000 of them by the time they reach London, Henry gathered a force of 25,000 men and very easily the rebels are defeated with 1000 rebels killed. We can see from the rebellions that the English people didn't have much respect for him and weren't willing to pay his taxes and I'm sure they would have hesitated to kill Henry just like they killed his representative In the Yorkshire rebellion. Although from the rebellions we saw his army could stand the threat and force of 15,000 rebels, therefore in this was he was quite secure but he only needed one big rebellion and possibly he could have been defeated. ...read more.

He began to negotiate with France and Spain. At the same time, he married his daughter, Margaret, to James IV of Scotland, thereby assuring a Scottish amity for the remainder of the reign However the succession was by no means secure in Henry VII reign. When Henry VII heir Prince Arthur died prematurely on April 2, 1502 Prince Henry was only ten, and if he were not to survive there remained only his sisters Margaret and Mary. Henry VII fell ill shortly after Arthur's death, making the continuance of the dynasty suddenly seemed doubtful. However Henry would live for seven more years giving Prince Henry enough time to mature, and Henry VII enough time to further consolidate his dynasty Henry died on 21st Apr, 1509 at Richmond Palace, Surrey. And perhaps in his very death his greatest achievement is revealed, for his son, Henry VIII succeeded him peacefully, with no immediate rival to challenge the crown. Less than 25 years after Henry VII had risked all on Bosworth Field, his throne was secure in his dynasty. In conclusion during Henry VII reign he was insecure however he handled his reign well. A reign in which he survived plots from the Yorkists, threats from pretenders, defeated the rebellions, had a child and treated the nobility with care. ...read more.