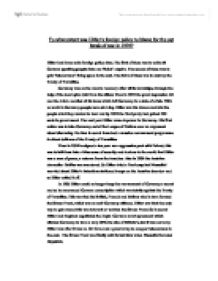 To what extent was Hitler's foreign policy to blame for the out break of war in 1939?

To what extent was Hitler's foreign policy to blame for the out break of war in 1939? Hitler had three main foreign policy aims. The first of these was to unite all German speaking peoples into one 'Reich' empire. The second of these was to gain 'lebensraum' living space in the east. The third of these was to destroy the Treaty of Versailles. Germany was on the road to recovery after all its hardships, through the help of the doors plan (aid from the allies). Then in 1929 the great depression hit and the U.S.A recalled all its loans which left Germany in a state of crisis. With no work in Germany people were starving. Hitler saw his chance and told the people what they wanted to hear and by 1932 the Nazi party had gained 230 seats in government. The next year Hitler came to power in Germany. His first action was to take Germany out of the League of Nations over an argument about disarming. ...read more.

The Stresa Front was finally delt its last blow when Mussolini invaded Abyssinia. This put Hitler to the back of peoples minds, and while Britain and France worried over what to do about Abyssinia, Hitler Ordered the remilitarization of the Rhineland. This was the biggest gamble of his career because if France or Britain had shown any resistance Hitler had told his Generals to pull out immediately. But Britain and France did nothing, France was to preoccupied with it internal problems and Britain said he was marching in his own back yard also it was clear by now that neither of these two countries wanted war and where increasingly following a policy of appeasement. This success of the remilitarization of the Rhineland gave Hitler confidence and increased the risks he would take to get what he wanted i.e. made his foreign policy more aggressive. In 1936 the Spanish Civil war began. In this war Hitler and Mussolini backed the side of Franco, this was the begging to the alliance between Germany and Italy. ...read more.

the Sudetenland and also a piece of paper was signed to say that never would Britain and Germany go to war with each other again. Then in 1939 Hitler ordered the invasion of the rest of Czechoslovakia this marked the end of Britain's appeasement and Britain began rapid rearmament and promised that Britain and France would protect Poland as this was Hitler's obvious next target. This was it war! But could this have been avoided? The answer is yes. Although Hitler was aggressive with his foreign policy aims if England or France had stood up to him a lot earlier e.g. over the Rhineland it is most likely the Second World War could have been delayed and even possibly prevented. Appeasement was the key to Hitler's success, by giving in to his small demands made him slowly more ambitious which in turn led to difficult circumstances and then war. Another argument is if the Treaty of Versailles had been less harsh then the Weimar Republic would have been stronger and stayed in power this stopping Hitler from coming to power. ...read more.