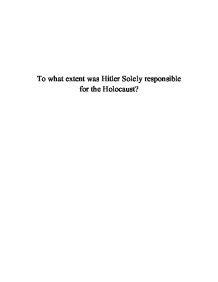 To what extent was Hitler solely responsible for the Holocaust

To what extent was Hitler Solely responsible for the Holocaust? While undeniable the holocaust will forever remain as one of the darkest passages in history, an argument has emerged amongst historians concerning its origins and over who instigated it. Many historians view the path to Auschwitz and the massacre of the Jewry as a 'straight road', seeing Adolf Hitler (military and political leader of Germany 1933-1945) as the sole instigator of the event, while others claim that the responsibility of the Holocaust lies with numerous other perpetrators, such as the bureaucracy, architect of genocide Heinrich Himmler and the ordinary German citizens. This essay attempts to analyze who in bears the ultimate responsibility for one of the biggest crimes against humanity. Is Hitler the soul individual behind the genocide of the Jewry or can the responsibility be divided up with numerous other agencies involved. In order to answer whether Hitler was central to the Holocaust and its occurrence, one needs to be able to understand why Hitler expressed such a vehement hatred towards the Jews. Although Historians have long debated where Hitler acquired his anti-Semitic views from, Hitler himself has stated that they were first developed in Vienna between 1908-1913. During this period, Vienna was ripe with traditional racial prejudice, and many historians have claimed that Hitler may've been influenced by the writings of ideologist anti-Semite Lanz von Libenfels and politicians such as Karl Lueger. In addition the anti-Semite music of operatic composer Richard Wagner was said to have particularly profound effect on the youthful Hitler. Hitler's own friend from that period of his life Augest Kubizek claimed that the 'charged emotionality of this music' provided Hitler a means for 'self hypnosis' and the ingredients to escape into a fantasy. Historian Gerald Flemming has also claimed that the very essence of Wagner's anti-Semite music found its way through Hitler into the National Socialist Radical Doctrine (Weltanschauung). ...read more.

Browning's quote perfectly summarizes the relationship between Adolf Hitler and Heinrich Himmler. While Hitler was the author behind the Holocaust, it was in fact Himmler that was able to translate Hitler's ideology into a concrete program. Himmler was the mastermind behind a number of concentration camps such as Austwhichz, which saw the death of over 2 million Jews. Like the Furher, the very idea of racial purity dominated Himmler's mind and he too wanted to assert the authority of the Aryan race. In Himmler's 1942 Posen speech, he claimed that only one decent Jew was found amongst '80 million Germans', so thus forth, a form of racial cleansing was indeed necessary. Himmler continued to say that the Nazi party's program was based on the 'elimination of Jew's' and that their extermination would indeed be carried out and remain as a 'never to be written page of glory'. While it is undeniable that figures like Himmler are central to the Holocaust, the idea that they bear ultimate responsibility is rather foolish. For example, Mein Kampf Hitler spoke about the gassing of the Jews but it was men like Himmler would show blind faith and loyalty in pursing Hitler's ideology. While he was most defiantly the architect of genocide, Himmler's ideas are perhaps seen as fully justified and legitimate as they are linked to the will of the Furher. Furthermore, Himmler would have had to receive some form of authorization, (even if it were just a simple 'nod of the head'9, as Browning has suggested) in order translate the Fuhrer's will into an actual program. When Himmler put forward ideas regarding the extermination of the Jewry, Hitler would have to sanction any of these before they were given effect. For example, Himmler's request to have 600'000-700'000 Jews in Southern France, 'done away with',10 could only have been implemented if Hitler acceded to this. The argument regarding ordinary Germans and the responsibility they bore for the holocaust still rages today. ...read more.

For one, despite the fact that Hitler demonstrated an intense, deep hatred for the Jews, with an ideology fixated on their removal from society, Hitler himself didn't play a large role in the formulation of policies before the Final solution or during it. Instead, his main role consisted or 'setting the vicious tone within which the persecution took place'16. However, Hitler did delegate authority to a number of individuals, such as Himmler, Heydrich and numerous other top Nazi officials, whom were then able to justify their actions as legitimate by linking it to the will of the Furher. Without Hitler's dogmatic unwavering stance that all Jews in Europe be eliminated, which crystallized in 1941 as a realizable aim to physically exterminate the Jews, the Holocaust would most certainly not have come about. However, it would also not have become reality without the collaboration of a number of other s, such as his officials, the bureaucracy the SS, the Gestapo and to some extent the ordinary German people whom were able to turn Hitler's sordid fantasy turned into a reality. Hitler's initial intentions indeed played a fundamental role in bringing about the Holocaust, and indeed, the magnitude of mass genocide would no way have been possible without some form of authorisation from the Fuhrer, hence forth allowing us to conclude that 'No Hitler, No Holocaust'. 1 Gerald Flemming: It is the F�hrer's Wish 2 Lucy Dawidowicz: the war against the Jews 3 Michael R Marrus-The Holocaust in History 4 The Nazi Dictatorship problems and perspective of interpretations-Ian Kershaw 5 The Nazi Dictatorship problems and perspective of interpretations-Ian Kershaw 6 Destruction of European Jews-Raul Hilberg 7 Eichmann in Jerusalem-Hannah Ardent 8 Anti-Semitism in the Holocaust-Access to History 9 The Nazi Dictatorship-Problems and perspectives of interpretation-Ian Kershaw 10 http://www1.yadvashem.org/about_holocaust/studies/vol34/Kershaw%20E.pdf-Ian Kershaw 11 H.Gramml-Anti Semitism in the Third Reich 12 Daniel Goldhagen-Hitler's willing executioners 13 Daniel Goldhagen-Hitler's willing executioners 14 Michael R Marrus-The Holocaust in History 15 Michael R Marrus-The Holocaust in History 16 The Nazi Dictatorship-Problems and perspectives of interpretation ?? ?? ?? ?? ...read more.