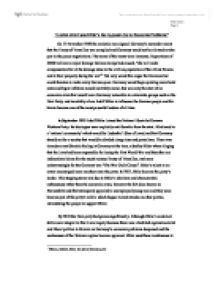 To what extent was Hitlers rise to power due to Economic Problems?

To what extent was Hitler's rise to power due to Economic Problems? On 11 November 1918 the armistice was signed. Germany's surrender meant that the Treaty of Versailles was compiled and Germany would not be allowed to take part in the peace negotiations. The terms of the treaty were immense. Reparations of �6600 million to repair damage German troops had caused, "she will make compensation for all the damage done to the civilian population of the Allied Powers and to their property during the war"1 Not only would this anger the Germans but could threaten to make every German poor. Germany would begin printing more bank notes and hyper-inflation would inevitably occur, this was only the start of an economic crisis that would leave Germany vulnerable to extremists groups such as the Nazi Party, and inevitably allow Adolf Hitler to influence the German people and for him to become one of the most powerful leaders of all time. In September 1919 Adolf Hitler Joined the National-Socialist German Workers Party. Its ideologies were explicitly anti-Semitic from the start. It believed in a 'national community' which would be 'judenfrei' (free of Jews) and that Germany should not be a society that would be divided along class and party lines. There was already an anti-Semitic feeling in Germany at the time, aided by Hitler when alleging that the Jews had been responsible for losing the First World War and therefore are indirectly to blame for the much ruinous Treaty of Versailles, and more embarrassingly for the Germans was "The War Guilt Clause". Hitler's talent as an orator encouraged more members into the party. In 1921, Hitler became the party's leader. This stepping stone was due to Hitler's charisma and characteristic ruthlessness rather then the economic crisis, however the SA (also known as Brownshirts and Stormtroopers) appealed to unemployed young men and they soon become part of the party's militia which begun violent attacks on other parties, intimidating the people to support Hitler. ...read more.

In just six weeks from the beginning of June to the middle of July, the German central bank was obliged to hand out over two billion dollars-worth of gold and foreign currency. The resulting chaos led to great social unrest and was a key factor in the rise of Adolf Hitler.7 The high unemployment rate and the economic hardship caused the radicalisation of the electorate, the two extreme parties the Communists on the left and the Nazis on the right. A parliamentary stalemate developed, and between 1930 -1933 no government could secure a parliamentary majority in the Reichstag. The lack of cooperation between the labour parties helped Hitler in gaining power, against the wishes of the majority of Germans. The parties of the left, the SPD and the KPD, were bitterly divided and unable to mount an effective opposition which gave the Nazis their opportunity to blame the crisis on the "Jewish financiers" and the Bolsheviks. Although completely not the case, the German people believed Hitler's message and they become the second-largest party in the Reichstag. Propaganda was an important factor in promoting Hitler and his ideas and ensuring his image was impeccable. The inability of the democratic parties to form a united front, the self-imposed isolation of the KPD and the continued decline of the economy all played into Hitler's hands. In 1932, Germany's political crisis deepened and Hitler chose this moment to run for president. Although he was defeated he gained a very respectable 13million votes and since Hindenburg did not campaign, Hitler had the whole of Germany listening to him.8 Germans had voted for Hitler because of his promises to revive the economy, to restore German greatness and overturn the Treaty of Versailles. However by 1933 support for the Nazis fell, possibly because the worst of the depression had passed or possibly because middle-class voters had supported Hitler previously as a protest but had drawn back from the prospect of actually putting him into power. ...read more.