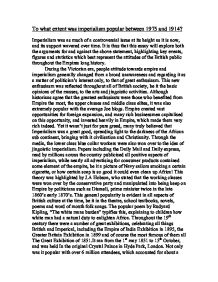 To what extent was imperialism popular between 1975 and 1914?

To what extent was imperialism popular between 1975 and 1914? Imperialism was as much of a controversial issue at its height as it is now, and its support wavered over time. It is thus that this essay will explore both the arguments for and against the above statement, highlighting key events, figures and statistics which best represent the attitudes of the British public throughout the Empires long history. During the Victorian era, people attitude towards empire and imperialism generally changed from a broad unawareness and regarding it as a matter of politician's interest only, to that of great enthusiasm. This new enthusiasm was reflected throughout all of British society, be it the basic opinions of the masses, to the arts and jingoistic activities. Although historians agree that the greatest enthusiasts were those who benefited from Empire the most, the upper classes and middle class elites, it was also extremely popular with the average Joe blogs. ...read more.

This general popularity is evident in all aspects of British culture at the time, be it in the theatre, school textbooks, novels, poems and word of mouth folk songs. The popular poem by Rudyard Kipling, "The white mans burden" typifies this, explaining to children how white man had a natural duty to enlighten Africa. Throughout the 19th century there were a number of great exhibitions, celebrating all things British and Imperical, including the Empire of India Exhibition in 1895, the Greater Britain Exhibition in 1899 and of course the most famous of them all The Great Exhibition of 1851.It ran from the 1st may 1851 to 15th October, and was held In the original Crystal Palace in Hyde Park, London. Not only was it popular with over 6 million attendees, which accounted for about a third of the British population at the time, but many leading figures of the era attended, including Charles Darwin and most of the Royal family. ...read more.

After the Boer war people began to question Empire, and under the Government of Lord Salisbury and the like, general lust for overseas gains began to dwindle. In essence, Imperialism was generally very popular with the masses for the majority of the later half of the 19th century. The elites liked it as it simply fortified their social positions with new wealth and stature, and the working class tended to like it as it was something they could aspire to. Crude patriotism was often enough to justify support for imperialism, just like supporting a football team, people thought it was their duty to support King and country no matter what. However, like most things this support had its time, and after a while the working classes in specific started to grow weary of Empire, realising it bought little for them, only for the rich privately educated army officers and wealthy bankers and investors. By the early 20th century, support for Empire was falling, and by the First World War, empirical expansion had almost stopped all together. ...read more.