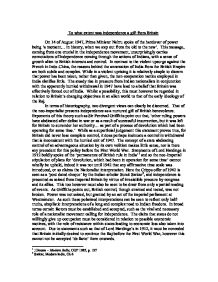 To what extent was independence a gift from Britain.

To what extent was independence a gift from Britain On 14 of August 1947, Prime Minister Nehru spoke of the handover of power being 'a moment... in history, when we step out from the old to the new'. This message, coming from one crucial in the independence movement, unsurprisingly carries connotations of Independence coming through the actions of Indians, with a sense of growth alien to British interests and control. In contrast to the violent upsurge against the French in Indo-China, the reasons behind the annexation of India from the British Empire are both subtle and complex. While in a violent uprising it is relatively simple to discern that power has been taken, rather than given, the non-cooperation tactics employed in India clarifies little. The steady rise in pressure from Indian nationalists in conjunction with the apparently hurried withdrawal in 1947 have lead to a belief that Britain was effectively forced out of India. Whilst a possibility, this must however be regarded in relation to Britain's changing objectives in an alien world to that of the early ideology of the Raj. In terms of historiography, two divergent views can clearly be discerned. That of the neo-imperialist presents independence as a nurtured gift of British benevolence. Exponents of this theory such as Sir Percival Griffiths point out that, 'other ruling powers have abdicated after defeat in war or as a result of successful insurrection, but it was left for Britain to surrender her authority... as part of a process of devolution which had been operating for some time.' While as a superficial judgement this statement proves true, for Britain did never lose complete control, it does perhaps insinuate a control in withdrawal that is inconsistent with the hurried exit of 1947. The concept of a state abdicating control of an advantageous situation by its own volition makes little sense, nor is there any precedent for this policy before the First World War. ...read more.

Throughout its history 'the Raj operated under powerful constraints such as the costs of its armed forces and administration16,' thus the importance of Indians in running the country as a whole correlates to their importance in economic factors. In this light, it cannot be said that nationalist pressures (as opposed to direct action by Congress which had a significant impetus with regard to taxation) had a large impact on the economics of Britain and India but economics can be seen to have greatly aided nationalism. Stemming from the days of the East India Company rule, the free-trade policy favoured Britain and stifled the growth of Indian post war industry. Congress' opposition to free trade was, as Brasted states 'protectionism in all but name'17, and therefore appealed to Indian industry. This perhaps best highlights the value of the economy to the Indian nationalist movement and eventual independence. Excluding terrorist insurgence such as that of 1942, nationalist action rarely directly affected the British economically, but rather helped to arouse the Indian population. Lord Lytton referred to the Indian peasantry as 'an inert mass and if it ever moves at all, it will not move in obedience to its British benefactors'18. Thus economic reform was used a platform with which to arouse the masses and make evident that it was Congress, and not the Raj, which spoke for the people. Ghandi in particular must be assessed in this light as many of his policies attempted to mobilise Indians and sting the British, in some cases over economic issues. Both his Satyagraha of non-cooperation and salt tax march were attempts to defy British rule by disregarding financial laws to aid the nationalist cause. While non-cooperation illustrates the attempt to economically cripple the country, Ghandi's salt tax march does perhaps reveal a more potent defiance. In reality, the salt tax march was rather bagatelle in terms of economic effect, only reducing East Indian Company profits by 2%. ...read more.

To condemn Britain with regard to economics is unfair as it war forced into the situation by the war but moreover to condemn Britain leaving because of its declining control is unwarranted. Far from being reproachable, to say that the Raj was forced to end by the growth of nationalism is not to automatically decry British policy. Congress' dominance in the 1936 elections followed by their success in government, justified independence by demonstrating the capability of Indians to administer themselves. In 'Macaulayesque'31 terms Britain's task was complete, for Congress' growth and success exploded any myths of British racial superiority. To say that this manner of leaving gives credit to the British is not to denigrate the achievement of Indians who did have to overcome the stalwart resistance of the Raj . The timing of independence, while aided by factors such as the war, was an Indian success and not a British gift. However, to end here is to wrongfully deny any British benevolent contribution. In leaving, Britain left a considerable legacy of democracy and education that is as significant today as it was in 1947. Nationalist leaders such as Ghandi, Nehru and even Bose were all Oxbridge educated and perhaps even nationalism indirectly must reflect positively upon the British, for it is only due to the Raj that as vast an area as India developed a sense of cohesion. There are as many, if not more negative aspects of British imperialism (especially to modern day sensitivities) however Britain's decision to withdraw denotes much of its rule. In contrast to situations such as France's catastrophic attempt to control Indochina, Britain's lasting legacy and indeed gift was that it left peacefully. The timing was not Britain's however certain aspects and its very nature are to be appreciated for, as Trevor Royle32 suggests, 'it is one of the Raj's enduring strengths that when the time came to go they departed with exemplary grace and dignity'. ...read more.