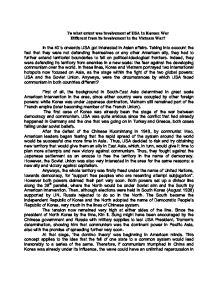 To what extent was involvement of USA in Korean War Different from its involvement in the Vietnam War? In the 40�s onwards USA got interested in Asian affairs. Taking into account the fact that they were not defending themselves or any other American ally, they had to further extend territorial boundaries to fall on political-ideological frontiers. Indeed, they were defending its territory from enemies in a new scale: the fear against the developing communism over the world. In these lines, Korea and Vietnam portrayed two international hotspots now focused on Asia, as the stage within the fight of the two global powers: USA and the Soviet Union. Anyways, were the circumstances by which USA faced communism in both countries different? First of all, the background in South-East Asia determined in great scale American intervention in the area, since either country were occupied by other foreign powers: while Korea was under Japanese domination, Vietnam still remained part of the French empire (later becoming member of the French Union). The first case of Korea was already been the stage of the war between democracy and communism. USA was quite anxious since the conflict that had already happened in Germany and the one that was going on in Turkey and Greece, both cases falling under soviet beliefs. ...read more.

Now McArthur was afraid of Chinese power and thought that the best strategy to defeat communism in the area was only possible with atomic bombs. With this new horizon within the fight, president Truman feared a large-scale war that would provoke a nuclear war, which USA did not want. It pointed out the American limitations that would enclose them within the fight: they feared communism because the nuclear power that could destroy them, but the only force capable to defeat it was their nuclear power, something that, however, they could not use since it would drag them into a fatal war. Thus, now, the only American possibility focused to settle in East Asia to contain communism there: in January 1951 UN troops expelled the North Koreans troops from South Korea and fortified the frontier, until in July 1953, both countries firmed a peace agreement that stated the limit at the 38th parallel. After American impossibility for annexation of territories in East Asia, the new step had to be focused in the South, due to the independence of Vietnam, Laos and Cambodia from the French Union (Geneva Agreement, 1954). Then, Vietnam was temporarily divided into two countries, and analogously as Korea, the frontier was established at another parallel, in this case the 17th one. ...read more.

For China, American troops recovered Manchuria, they would give back China mainland to them. Communist China was not willing to accept that, and USA knew that she was capable of fighting bravely to an extent that USA did not want to test, since the split of the Sino-Soviet agreement left China in an uncertain situation from the international point of view: "We do not want the fighting in Korea to expand into a general war". Therefore, American government did not risk indeed and the only price was to lose North Korea. Nevertheless, in Vietnam they could use a more violent system as they communist China was already established and did not fear USA any more. Moreover, the conflict was seen under UN eyes: "solely for the purpose of restoring the Republic to its status prior to the invasion". For international support, it was a fight towards the human rights, since North Korea under communism did not want to hold elections. However, UN never supported the war in Vietnam and the international view of the war and American methods to be victorious pressed the government to reach the end of the conflict. Therefore, differences between the both wars was mainly due to internal factors of each country, but especially the foreign intervention that encouraged or restrained American actions to act in one way or another. ...read more.