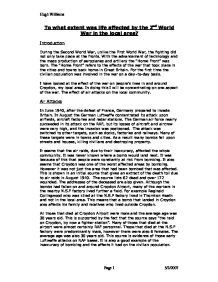 To what extent was life affected by the 2nd World War in the local area?

To what extent was life affected by the 2nd World War in the local area? Introduction During the Second World War, unlike the First World War, the fighting did not only take place at the fronts. With the advancement of technology and the mass production of aeroplanes and artillery the "Home Front" was born. The "Home Front" refers to the effects of the war that took place in the cities and towns back home in Great Britain. For the first time the civilian population was involved in the war on a day-to-day basis. I have looked at the effect of the war on people's lives in and around Croydon, my local area. In doing this I will be concentrating on one aspect of the war. The effect of air attacks on the local community. Air Attacks In June 1940, after the defeat of France, Germany prepared to invade Britain. In August the German Luftwaffe concentrated its attack upon airfields, aircraft factories and radar stations. The German air force nearly succeeded in its attack on the RAF, but its losses of aircraft and aircrew were very high, and the invasion was postponed. The attack was switched to other targets, such as docks, factories and railways. Many of these targets were in towns and cities. As a result many bombs fell upon streets and houses, killing civilians and destroying property. ...read more.

Also at the bottom of the caption there is a sentence that reports on six fatalities and twenty-five casualties nearby. However this seems to have been added as an after thought and is not meant to draw the reader's attention. It suggests that it needs no explanation. This is the result of the government's strong control of the papers. It is to try and maintain high morale. This is reflected in the fact that many newspaper articles focus on survival stories and other morale boosting topics. This type of property damage was common and it is shown in a source from my extended research "A Comprehensive report prepared by the Special War Executive Committee of Surrey County Council - 1945". This source is extremely detailed and contains information about property damage. It states that throughout the war in Croydon alone, 2323 houses were demolished and over 95000 houses were damaged by bombing. These figures are much higher than any other borough in the area. For example in Banstead only 97 houses were destroyed and 5891 were damaged. These high statistics may have been due to the fact that Croydon had an active RAF aerodrome during the beginning of the war. This would have attracted more attention than industrial areas in other boroughs. This source is extremely useful as it gives hard statistical evidence for the bombing of Croydon throughout the war. ...read more.

This suggests that there is a definite link between property damage, casualties and the number of bombs. This is due to the fact that the bombing not only caused casualties but it also destroyed large amounts of property. A newspaper article on "The Impact of flying bombs" supports these figures from the report. The article claims that Croydon is "The worst-hit borough in Greater London". It also states a few figures; these figures are similar to those published in the report. For example the newspaper article claims that 141 flying bombs fell on Croydon and the report claims that 144 bombs fell on Croydon. These slight discrepancies may be explained by the fact that the newspaper article was published before the report. Newspapers were also heavily censored by the government and were highly selective in the material they published. This may have attributed to the discrepancies. From all of the information I have collected from both my initial and extended research it seems clear that Croydon was definitely one of the worst affected areas in London. As the reports show with Croydon reporting over 36% of the total number of bombs in the local area. This is most likely due to its major communications point, Croydon Airport, which resulted in it being the most heavily bombed borough. This was due to the Luftwaffe's concentrated attacks on RAF bases and communications points in the early stages of the war. 1462 Words Hugh Williams Page 1 5/2/2007 ...read more.