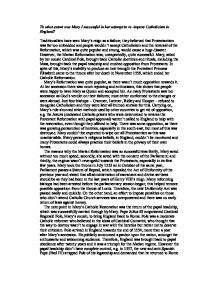 To what extent was Mary I successful in her attempt to re-impose Catholicism in England?

To what extent was Mary I successful in her attempt to re-impose Catholicism in England? Traditionalists have seen Mary's reign as a failure; they believed that Protestantism was far too embedded and people wouldn't accept Catholicism and the reversal of the Reformation, which was quite popular and strong, would cause a huge disaster. However, the Marian Reformation was, unexpectedly, quite successful. Mary, aided by her cousin Cardinal Pole, brought back Catholic doctrines and rituals, including the Mass, brought back the papal headship and crushed opposition from Protestants. In spite of this, Mary's inability to produce an heir brought the Protestant Princess Elizabeth came to the throne after her death in November 1558, which ended her Catholic Reformation. Mary's Reformation was quite popular, as there wasn't much opposition towards it. At her accession there was much rejoicing and enthusiasm, this shows that people were happy to have Mary as Queen and accepted her. As many Protestants saw her accession as God's verdict on their failures; most either conformed to the changes or went abroad. Just four bishops - Cranmer, Latimer, Ridley and Hooper - refused to recognise Catholicism and they were later all burned at stake for this. ...read more.

Approximately, 224 were burnt at the stake over the next three years and it was the most serious religious persecution in English history. The burnings were serious and gruesome and there were at least five burnings per month, over a 44 month period. Those burnt were mainly lesser men and were mostly from Norwich and London. Most of England didn't any burnings. The burnings were of laity who were zealous heretics, usually preachers; they had been convicted more than once. Mary was one of the driving forces behind the persecution; however it was also employed by bishops including Bishop Bonner of London. They believed that a small group of wicked men had led England to Protestantism, in the hopes of misleading the nation, and they had to burn them at stake in order to save the Church from them and other heretics, as the Catholic Church had been teaching for centuries. By 1555, there was powerful Protestant opinion around, especially in London and other parts of the south east and Mary's regime would have been failing its spiritual duty if it turned a blind eye towards it. Only four bishops were executed and none of the victims were of noble or gentry status; there were very few Protestant martyrs from the ruling classes. ...read more.

However, the people of England seemed to have a lot of respect for the government and unity was large between people, therefore they Church of England was run by the monarch who was aided by a bench of bishops. Most people agreed with the government's policies, when faced with religious disagreement. Nonetheless, it is very clear that if Mary had lived longer, or had an heir, then the English Church would have remained Catholic for a much longer period and would have been successful, like the most of Mary's reign, despite the loss of Calais to the French. Much Protestantism would have remained but the Protestants would have been powerless and wouldn't have been able to challenge the Catholic Church; most Protestants would have conformed or left England to escape persecution, like most other Protestants. Protestant rebellions against the Catholic Church weren't popular, as proved with Wyatt's rebellion and the burning at stake of the 224 heretics. The Church was very popular, moderate and traditional which gave it widespread attractiveness. Mary's reign was seen as a triumph; she had easily restored Catholic beliefs and rituals to the English Church and had even brought back the papal headship. Her Catholic Reformation was genuinely popular and had little opposition. ?? ?? ?? ?? ...read more.