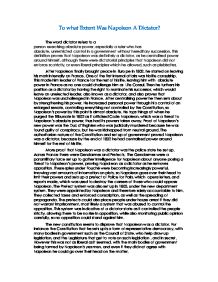 To what extent was Napoleon a Dictator

To what Extent Was Napoleon A Dictator? The word dictator refers to a person exercising absolute power, especially a ruler who has absolute, unrestricted control in a government without hereditary succession. This definition proves that Napoleon was definitely a dictator, as he centralised power around himself, although there were dictatorial principles that Napoleon did not enforce so strictly, or even liberal principles which he allowed, such as plebiscites. After Napoleon finally brought peace in Europe in 1802, he started on leaving his mark internally on France. One of the first internal affairs was his life consulship. This made him leader of France for the rest of his life, leaving him with absolute power in France as no one could challenge him as Life Consul. Then he furthers his position as a dictator by having the right to nominate his successor, which would leave an unelected leader, also known as a dictator, and also proves that Napoleon was unchallenged in France. After centralising power he then sets about by strengthening his power. ...read more.

The new constitution seems to disprove that Napoleon was a dictator. For instance the Constitution that he sets up is a form of representative democracy, with many bodies in government such as the Council of State, who help draw up legislation, and the Legislature that get to vote on such legislation, and in secret. However this was not as liberal as it seemed, with the main bodies of government being formed by Napoleon's yes men, and even if they did not agree with Napoleon he could go over their head on the matter. The voting system changes also promote the idea of democracy not dictatorship, simply being elections are anti the dictatorship principle. However this was not democratic in the slightest, as it was not universal suffrage being proposed, just for men over 21, who paid for the right to suffrage, therefore not incorporating those who couldn't afford it and women. Even then it is questionable whether the elections were fair, many people fearing the prefects, as voting was not secret, and even if it was the prefects or ministers would increase their figures to please Napoleon. ...read more.

The concordat allowed religious tolerance in France for all religions, and allowed religion to be freely exercised in France, by the great majority of citizens. Nevertheless it strengthened Napoleons powers, as public worship had to be "in conformity with police regulations" and the church became state controlled, whereby the clergy became civil servants, being bound to the government by oath. When the Organic Articles were introduced, it became even more illiberal because clauses limited Papal control over French bishops while state control increased. Napoleon even standardised church catechisms, which were taught in schools, which scares the people into obeying Napoleon as the catechisms make him seem like a God. In conclusion it was clear that Napoleon was a dictator as he centralised power around himself, especially in his style of government and the constitution he sets up, where all power is given by Napoleon, and no-one could challenge that power. Even the liberal reforms introduced where just a front to appease people, and his real intentions was to make people loyal and obey him, either through fear of the police state set up, or giving menial concessions to the people that were actually illiberal in themselves such as the Concordat. ...read more.