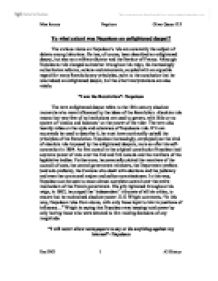 To what extent was Napoleon an enlightened despot?

To what extent was Napoleon an enlightened despot? The various views on Napoleon's rule are constantly the subject of debate among historians. He has, of course, been described an enlightened despot, but also as a military dictator and the Saviour of France. Although Napoleons rule changed somewhat throughout his reign, his increasingly authoritarian reforms, actions and statements, coupled with an arguable regard for many Revolutionary principles, point to the conclusion that he was indeed an enlightened despot, but the other interpretations are also viable. "I am the Revolution"- Napoleon The term enlightened despot refers to the 18th century absolute monarchs who were influenced by the ideas of the Revolution. Absolute rule means that very few of no institutions are used to govern, with little or no system of 'checks and balances' on the power of the ruler. The term also heavily relies on the style and substance of Napoleons rule. If it can accurately be used to describe it, he must have continually upheld the principles of the Revolution. Napoleon increasingly, employed just the kind of absolute rule imposed by the enlightened despots, more so after his self-coronation in 1804. As first consul in the original constitution Napoleon had supreme power of veto over the 2nd and 3rd consuls and the members of the legislative bodies. ...read more.

He did not call for universal manhood suffrage, nor did he govern by means of popular sovereignty, by acting as the people indicated through elected officials. The enlightenment also called for rational and uniform government and administration. While here Napoleon could easily be criticised for the harsh nature of rule, Ellis comments on its "uniformity throughout and well-ordered hierarchy of status", especially when compared to the 'muddled' years of the Directory. In his law of April 1803, Napoleon introduced graded salaries for all public officials, and also the adoption of pensions, in this way he created a system where salary and promotion depended more on merit than seniority. One way in which Napoleon brought uniformity and equality was in his reform of the law, another Revolutionary idea. Before the Consulate, French law differed in the various regions and provinces, thus making equality before law impossible, since a persons actions could be deemed legal in one place and illegal elsewhere. Napoleon used his Codes for civil and criminal procedure, commerce and punishment to provide exactly the kind of uniformity the Directory had tried and failed to create. Here Napoleon can be praised for successfully upholding the Revolution in his rule, since he promoted government uniformity equality before the law. Napoleon also abolished feudalism throughout France. ...read more.

It is also clear that Napoleon did not allow freedom of censorship and press in France, as he stifled all aspects off free press from the outset of his reign. Overall, Napoleon can be seen to uphold the principles, but mainly those with which he benefited by personally. For instance he made Catholicism legal, ensuring religious tolerance, but he did so in return of the loyalty of the Bishops. Also, he did indeed promote education, but only to the sons of the military people on whose support he relied, and who of course he would need for his future battles and conquests. Napoleon's claim that he was acting in the people's interest is also flawed, since he felt the need to fake plebiscites to show just how much he was adored. His uniform codes are, as Napoleon himself has proclaimed, part of his legacy, and in these he can be commended, apart from his blatant sexism, which did not give women the same rights as men in front of a court of law. In conclusion, while Napoleon can be hailed most certainly as a Despot, ruling with absolute and complete power in every aspect of French life, he can only be termed as enlightened as something which suited him politically, and was not necessarily terribly important to the man himself. Miss Jeremy Napoleon Oliver Quaye 13.3 Dec 2002 1 A2 History ...read more.