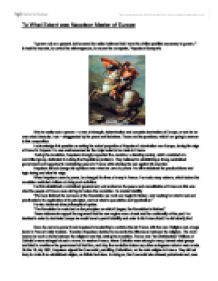 To What Extent was Napoleon Master of Europe

To What Extent was Napoleon Master of Europe "I govern not as a general, but because the nation believes that I have the civilian qualities necessary to govern,"" to heal the wounds, to correct the extravagances, to secure the conquests, "Napoleon Bonaparte. Was he really such a person - a man of strength, determination and complete domination of Europe, or was he an over rated character, over - exaggerated by the press and historians. Those are the questions, which I am going to answer in this composition. I acknowledge this question as asking the actual proportion of Napoleon's domination over Europe, during his reign of France's Emperor. He was well-renowned for the major reforms he made to France. During the revolution, Napoleon strongly supported the Jacobins, a debating society, which consisted of a committed group, dedicated to solving the Republican problems. They believed in establishing a strong centralised government and supported in maintaining peace in France while winning the war against his enemies. Napoleon did not change his opinions even when he came to power. He still maintained the practical ideas and logic during and after his reign. When Napoleon came to power, he changed the lives of many in France. He made many reforms, which before the revolution restricted civilians of doing such activities. He first established a centralised government, and worked on the peace and consolidation of France as this was what the people of France were aiming for before the revolution. He wanted stability. "We have finished the romance of the Revolution we must now begin its history, only seeking for what is real and practicable in the application of its principles, and not what is speculative and hypothetical." ...read more.

The Spanish joined in the alliance with France but both countries lost the battle at Trafalgar. In the end this was a failure since Napoleon realised that his navy will never be a strong as the British, so he rescinded the idea to the Directory of declaring war. A lot of money was wasted in the end since, the French civilians had to pay higher taxes, due to the fact that the war was extremely expensive. The battle of Marengo was a victorious battle that Napoleon won against the Austrians. Napoleon withheld his "peace and honour. " He beat the Austrians, all through strategy. He tricked the Austrians into chasing a small group of French soldiers. While the Austrians chased them, Napoleon's army attacked from the rear, creating a huge surprise for the Austrians. During this surprise attack he spread his generals out, so the Austrians could not escape them. Desaix, the Austrian's general came in to save the day. There was a certain amount of confusion that actually won the battle, but many historians says that Napoleon came out victorious. The French defeated the Austrians later that year and the Austrians made peace with France that year. During 1802, Napoleon made peace with Britain. The peace made him even more popular when he came back to France, as it had been the first time in 10 years, Europe had been in peace. The peace eventually did not last and practically the whole of Europe formed another Coalition in 1805. Through a series of battles, Napoleon beat the whole coalition - beating Britain, Russia, and Austria at the same time. ...read more.

Napoleon begged for mercy from the triumphant English, wishing to reside in a country house in Britain." The British just answered "St Helena." St Helena was an island situated in the middle of nowhere. It was an island 10 miles far, 6 miles wide. He was a prisoner in this island with 2 ships and 2000 soldiers guarding it. He was assigned a wooden bungalow, with no communications outside this island. He got fairly depressed on this island without anyone to speak to. "To die is not a problem, but to be defeated, it is like to die everyday." Bonaparte decided that his last campaign in life will be one devoted to the use of language. He wrote articles, read all the books he could find, and expressed his downfalls and his glistening heights. Napoleon decided to leave a legacy behind for the world in the future, present and past upon. As you can see above, I conclude that after all Napoleon was a great leader, but with the egotistical and over-confidence, he never eventually was the Master of Europe for a long period of time. He won a lot and lost a lot in a few years, which in my consideration, he was the master of Europe throughout his lifespan of domination. Although one can see from what I have said and described above, Napoleon lived a life to be admired by, brought France together and increased France's land and domination. Quoting "My business is to succeed, and I'm good at it. I create my Iliad by my actions, create it day by day," Napoleon will always be considerate throughout future as a fierce master of Europe, even through a limited amount of time, he will be a person to be forever admired by historians and people alike. ...read more.