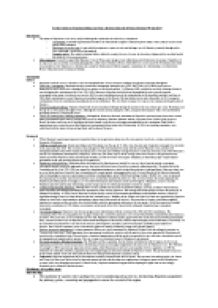 To what extent was Napoleon nothing more than a dictator?

﻿To what extent was Napoleon nothing more than a dictator in his rule of France between 1799 and 1815? Introduction * The nature of Napoleon?s rule can by analysed through the exploration of its three key components: * Government: A dictatorial government would be one which holds complete centralised power within a state, with no checks on the power of the individual. * Machinery of a police state: A state which incorporates a repressive rule and infringes on civil liberties; primarily through police force, patronage, censorship and propaganda. * Domestic policy: The control of internal affairs within the country; the use of sectors of education, religion and law to either benefit the nation or secure personal power. * Main argument: It cannot be argued that Napoleon?s rule of France grew progressively authoritarian and dictatorial in its manner. Regardless of its repressive aspects (notably censorship/propaganda), it did restore stability in France which had been a clear aim of the Revolution, thus while it is plausible to view Napoleon as a dictator, this cannot be wholly joined with the negative connotations of a dictatorship as he did provide France with political and economical stability. Government Liberal * Napoleon cannot be seen as a dictator, as his rule did uphold ideas such as universal suffrage and popular sovereignty throughout. * Plebiscites, constitutions: Napoleon not only created four constitutions during his rule (1799, 1802, 1804, 1815) which can be seen as democratic in itself, but he also ?submitted to the acceptance of the French people?. In February 1800, a plebiscite was held, allowing citizens to vote for/against the constitution of the Year VIII (1799). Moreover, Napoleon used plebiscites throughout his rule to provide popular sovereignty to the nation. A plebiscite was used in 1802 (second constitution) to pass the reintroduction of the hereditary principle, and later in 1804 (third constitution) to secure Napoleon as hereditary emperor of the French. ...read more.

* Police, tool for power: Operated under the control of Minister of Police, Fouché, the general police were a crucial tool in Napoleon’s consolidation in power. Their presence was somewhat intrusive, imposing censorship, preventing any uprising from opposition, searching for army deserters and imprisoning draft dodgers and enemy agents. Although not unreasonable as such, their general presence was intimidating and deterred any opposition to Napoleon’s regime. * Surveillance, gendarmes, prefects, senatories: Napoleon operated a system of extreme surveillance across France to ensure his regime remained stable. The body of gendarmes, of which there were around 18,000, reported daily to Fouché with intelligence on anyone who posed a threat to the state; these police were present in all parts of society across the country. The prefects and senatoreries were also expected to monitor public opinion in their local areas, told that their most important duty was to ‘supply us [the government] with trustworthy and positive information of interest’. Other aspects of surveillance, such as the cabinet noir – where post was opened – emphasises the sheer extent to which Napoleon operated a police state to support his dictatorial rule. * Livret, prevent urban uprising: Napoleon was aware that urban workers were an active and militant group during the Revolution. In this way, he enforced the livret, a passbook (similar to the guild system which had been abolished with the collapse of the ancien regime, 1789). This was intrusive and it essentially monitored the movement of workers to ensure there would be no strikes or trade unions. * Legion of Honour, imperial nobility, patronage: Napoleon also knew the importance of the notables in securing the future of his regime financially and politically. In this way, he used various bribes to gain their support, firstly in 1802 through the Legion of Honour. In its 12 years in operation, he handed out 38,000 awards (only 4000 to civilians) ...read more.

* Catechisms, state-church fusing, indoctrination: Not only did he join the state and church together, but he increasingly used it as a tool to indoctrinate the French people for political and personal advantage. The amendments to the church catechisms, made personally by him in 1806, were clear in their aims to promote obedience and loyalty to Napoleon?s authoritarian regime. His motives for this interference were obviously to produce loyal soldiers and civil servants, emphasised through the creation of a St Napoleon?s Day, 16th August, which fully * Judgement: It can be seen that Napoleon did implement a series of liberal reforms in France, but his motives for these were clearly self-promoting. Although providing free education and a meritocratic system, he only did so in order to ?cast a whole generation in the same mould? and produce a loyal army. In the same way, religion was strictly controlled through the Concordat and catechisms, all which ensured Napoleon?s sovereignty in France remained secure. Conclusion * To conclude, there is no doubt that Napoleon did certainly preside over an authoritarian regime. His government was central to supplement his personal power; the checks on his power from the Legislature and the Tribunate were in reality weak which inhibited any genuine democracy across the country. He irrefutably operated the machinery of a police state, using an extensive and often intrusive manner of surveillance across France, while using censorship and propaganda to ensure his regime remained unopposed. His domestic policy, despite appearing liberal through promoting meritocracy and freedom of religion, this was merely a facade to the way in which he used the sectors of education, religion and law to indoctrinate the people of his nation into supporting his rule. However, it is fundamental to note that while Napoleonic rule was essentially autocratic, the negative connotations that are associated with the term ?dictator? must be somewhat relieved as he did provide France with, regardless of the way in which he did it, social, economic and political stability throughout his rule. ...read more.