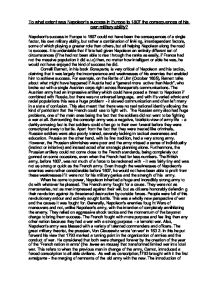 To what extent was Napoleon's success in Europe to 1807 the consequences of his own military ability?

To what extent was Napoleon's success in Europe to 1807 the consequences of his own military ability? Napoleon's success in Europe to 1807 could not have been the consequences of a single factor, his own military ability, but rather a combination of linking, interdependent factors, some of which playing a greater role than others, but all helping Napoleon along the road to success. It is undeniable that if fate had given Napoleon an entirely different set of circumstances (if he had not been able to rise through the ranks as easily, if France had not the massive population it did e.t.c) then, no matter how intelligent or able he was, he would not have enjoyed the kind of success he did. Correlli Barnett, in his book Bonaparte, is very critical of Napoleon and his tactics, claiming that it was largely the incompetence and weaknesses of his enemies that enabled him to achieve success. For example, on the Battle of Ulm (October 1805), Barnett talks about what might have happened if Austria had a "general more active than Mack", who broke out with a single Austrian corps right across Bonaparte's communications. The Austrian army had an impressive artillery which could have posed a threat to Napoleon if combined with Russia, but there was no universal language, and with it's varied ethnic and racial populations this was a huge problem - it slowed communication and often left many in a state of confusion. ...read more.

The amalgame also brought a great deal of military experience to his army Furthermore, the sheer size of Napoleons inherited army was the largest ever seen in Europe, a million men, and provided him with the ammunition, if you like, to launch devastating attacks on his enemies. He therefore inherited significant developments which had been introduced by the Republic, and which he subsequently built upon. The strength of his army, however, would not have been anywhere near as impressive if he had not the domestic foundations for success or strength of mind to know what to do with it. France had a huge population of around 28 million (the largest population in any single state in Europe) and so simply had a greater number of men to choose from. This also enabled Carnot to introduce the levee en masse which enlisted a massive 80,000 men each year into the army, fueling France's battles, which could be fought more often, more continuously and on more fronts than any other country. Although the large majority were from poor peasant families, universal conscription brought me from all classes together and created a new sense of unity in France. Also, France had a whole society organized for war. Napoleon had a military dictatorship so could use all the resources of the state and was not held accountable for his failures (e.g leaving armies in Egypt and Russia and losing 50,000 men a year as opposed to Wellington's 6,000). ...read more.

Even though both of these historians, and many like them, disagree on this aspect of him, they both say that Napoleon was probably the greatest commander of all time. This shows that, even though he may have been gifted with extraordinary circumstances, Napoleon's towering genius was the major driving force in his success and it is obvious that no ordinary commander could have gone as far as he did. After looking at various factors in Napoleon's success in Europe to 1807, it is evident that the scale of Napoleons success was dependent on a number of things; population size, Carnot's policy of conscription, French resources and the relative weakness of his enemies. Napoleon's journey to success was paved by a number of these absolutely crucial factors, without which no success would have been possible. Even though his military ability was one of these vital paving stones, one cannot really argue that it was more or less important than other crucial factors because they were all instrumental in allowing the extent of extent of Napoleon's success to be realized. However, I am positive that if Napoleon did have a less fortunate army given to him when he came to power, his enemies stronger, and the potential opportunity for success had not been so great, he would still have made the best out of what he had and would have made relative success, showing his huge military capabilities. ...read more.