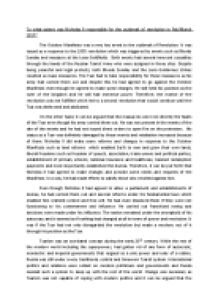 To what extent was Nicholas II responsible for the outbreak of the revolution in February?

﻿To what extent was Nicholas II responsible for the outbreak of revolution in Feb/March 1917? The October Manifesto was a very key event to the outbreak of Revolution. It was issued as a response to the 1905 revolution which was triggered by events such as Bloody Sunday and massacre at the Lena Goldfields. Both events had several innocent casualties through the hands of the Russian Tsarist Army who were assigned in those sites. Despite being peaceful and legal protests, both Bloody Sunday and the Lena Goldmines strikes resulted as mass massacres. The Tsar had to take responsibility for these massacres as his army had carried them out and despite this he had agreed to go against the October Manifesto even though he agreed to make some changes. He still held his position as the ruler of the kingdom and he still had immense power. Therefore, the motive of the revolution was not fulfilled which led to a second revolution that would continue until the Tsar was dethroned and abdicated. On the other hand, it can be argued that the massacres were not directly the faults of the Tsar even though his army carried them out. ...read more.

He carried out franchised voting and decisions were made under his influence. The nation remained under the stronghold of his autocracy and it seemed as if nothing had changed at all in terms of power and revolution. It was if the Tsar had not only disregarded the revolution but made a mockery out of it through his position as the Tsar. Tsarism was an out-dated concept during the early 20th century. While the rest of the modern world including the superpowers, had gotten rid of any form of autocratic, monarchic and imperial governments that reigned as a sole power and ruler of a nation, Russia was still under a very traditional, central and timeworn Tsarist system. International politics and relations were reliant on modern politicians and governments and Russia needed such a system to keep up with the rest of the world. Change was necessary as Tsarism was not capable of coping with modern politics and it can be argued that the system was bound of be changed no matter what Nicholas II did/was. Russia had also been suffering from various long term problems such as industrialisation, agriculture, famine, class division and social disorder. ...read more.

Nicholas also got rid of Witte, the minister who had made grave positive changes to the system that helped strengthen Russia. This undermined his credibility as a considerate leader. The leaders of the revolution such as the Bolsheviks were very organised and determined to attain and achieve the revolution. The uprising had levitated for several years and there was very little the Tsarist government could do to silence these revolutionaries. Their cause was further strengthened by events such as Bloody Sunday and Russia?s failures in the Great War. There was also a rise in syndicalism and the government could not get involved heavily following Bloody Sunday and Lena Goldfields. The Tsarist regime had never really gotten rid of such individuals and parties even though they had used innumerable methods to punish and stop them (executions, exile, and forced labour). The rise in assassinations of political leaders (Stolypin) further held opposition on a stronger position to Tsardom. To conclude, Nicholas II had his role on contributing to the 1917 revolution but revolution was also impending. It is true that the determination and desire for revolution remained strong until it was accomplished but Nicholas? actions only ignited a fire that was already set alight. ...read more.