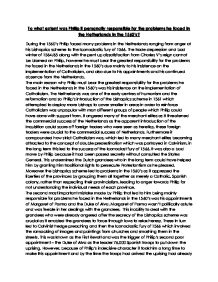 To what extent was Philip II personally responsible for the problems he faced in the Netherlands in the 1560s?

Margaret of Parma wasn't politically astute and was feeble in her dealings with the grandees. This inability to deal with the grandees who were already angered after the secrecy of the bishoprics scheme was crucial as it enabled the grandees to force through laws to relax heresy. These in turn led to Calvinist hedge preaching and then the Iconoclastic fury of 1566 which involved the ransacking of images and paintings from churches and smashing them in the streets. This was known as the First Revolt and was the trigger of Philip's second poor appointment - the Duke of Alva as the leader 76,000 Spanish troops to put down the uprising. However, because of Philip's indecisive character it took him a long time to make this appointment and by the time the troops had arrived the uprising had already been put down by alarmed nobles. The appointment of the Duke of Alva was a bad decision by Philip because Alva's brutal massacre of those involved in the uprising through the ...read more.