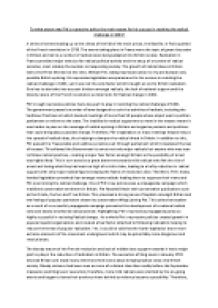 To what extent was Pitts repressive policy the main reason for his success in resisting the radical challenge in 1801?

﻿To what extent was Pitt?s repressive policy the main reason for his success in resisting the radical challenge in 1801? A series of events leading up to the climax of the fall of the main prison, the Bastille, in Paris sparked of the French revolution in 1789. The events taking place in France were the topic of great discussion in Britain and led to a number of radical views being adopted into British society. Radicalism in France provided major stimulus for radical political activity and the setup of a number of radical societies, most notably the London corresponding society. The growth of radical ideas in Britain led to the Prime Minister at the time, William Pitt, taking repressive action to try and dampen any possible British uprising. His repressive legislation was paramount to his success in resisting the radical challenge in 1801, yet it was not the only factor which brought an end to British radicalism. One has to also take into account division amongst radicals, the lack of national support and the bloody nature of the French revolution as deterrents for Radical change in 1801. Pitt?s tough repressive policies had a key part to play in resisting the radical challenge of 1801. The government passed a number of laws designed to curb the activities of radicals, including the Seditious Practises act which banned meetings of more than 50 people whose object was to petition parliament or reform to the state. ...read more.

The bloody nature of the French revolution and lack of middle class support towards it had a major part to play in the reduction of radicalism in Britain. The execution of King Louis in January 1793 shocked Britain and made many reformers think twice about bringing radical views into British society. Bloody violence had been seen as more of a distant idea than reality before the September massacres and King Louis? execution; therefore, more mild radicals were startled by the on-going events and began to leave their previous views behind as violence became a possibility. Therefore, resulting in a reduction in radical support leading to the steady decline of radicalism within Britain. In addition to this, there was little support for radicalism amongst the middle class as they never fell into the payment categories of any of the radical societies due to expensive signing on fee?s or societies which consisted of people lower in the class system. This resulted in a large percentage of the British population being cut off from direct revolutionary ideas, causing gaps amongst national radicalism. This was ultimately a key down fall in radicalising Britain as the lower and upper classes could not come together as a collective power due to the absence of the middle class, resulting in the gradual decline of popular radicalism. ...read more.

The strong handed tactics of these groups worried borderline radicals and in most cases prompted them to drop their more radical views, resulting in a loss of radical support. In addition to this, there were nearly 2,000 branches of Reeves associations spotted around Britain which acted as organisations preserving British history and resisting radicals reformers. The sheer growth and numbers of these Reeves associations smothered radical groups and teachings, leading to a reduction in radical support as many felt change could never be achieved whilst British loyalism was this strong. Furthermore, many argue that British radicalism was not as big of a threat as Pitt believed as only 25% of Britain voted in support of radicalism highlighting the fact that a large majority of the population supported the status quo. The lack of mass national support meant that radical groups could push their ideologies into society, resulting in the gradual decline of support. Overall, one would say that Pitt?s repressive policies went some way to successfully resisting radical change in Britain. Yet, I am more inclined to follow the belief that the threat of radicalism was not as strong as Pitt had thought and the large support for British loyalism was the real key to supressing radical change. Without full national support change would be very hard to achieve, therefore, this has to be the major cause of radical suppression. ...read more.