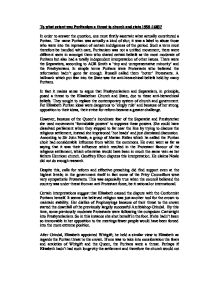 To what extent was Puritanism a threat to church and state 1558-1603? In order to answer the question, one must firstly ascertain what actually constituted a Puritan. The name Puritan was actually a kind of slur; it was a label to abuse those who were into the repression of certain indulgences of the period. Such a term must therefore be handled with care, Puritanism was not a unified movement, there were different sects in amongst them who shared certain beliefs as the most moderate of Puritans but also had a totally independent interpretation of other issues. There were the Separatists, according to AGR Smith a 'tiny and unrepresentative minority' and the Presbyterians. In simple terms Puritans were Protestants who believed the reformation hadn't gone far enough. Russell called them 'hotter' Protestants. A hallmark which put fear into the State was the anti-hierarchical beliefs held by many Puritans. ...read more.

Geoffrey Elton disputes this interpretation. He claims Neale did not do enough research. Despite this, calls for reform and effective preaching did find support even at the highest levels; in the government itself in fact some of the Privy Councillors were very sympathetic Protestants. This was especially true when the council believed the country was under threat from an anti Protestant force, be it national or international. Certain interpretations suggest that Elizabeth caused the dispute with the Conformist Puritans herself. It seems she believed religion was just another tool for the crown to maintain stability. Her dislike of Prophesyings because of their threat to the crown started the downfall of the previously largely successful Archbishop Grindal. By this time, some previously moderate Protestants were following the outspoken Cartwright into Presbyterianism. So in this instance she shot herself in the foot. If she hadn't been so immovable in her opposition to the meetings fewer people would have been forced into the more extreme position. ...read more.

Perhaps this threatened the position of the state and the church; however there is much evidence to suggest personal apathy on the part of the population as regards religion. This is understandable considering the yo-yoing of doctrines over the years previously. When standing in the shoes of the Queen or one of the key Bishops, Puritanism with all its faces including Separatism, Conformism, Presbyterianism, could have posed a huge threat to the stability of the Church and State which they had worked so hard to secure. However when standing in the shoes of a provincial puritan the actions of the crown to squash their actions would have probably seemed a hideous over reaction. The only concrete fear they could have legitimately had was the removal of the hierarchical system. As Russell states these made up a tiny minority of the Protestant minority. Mad outbursts like that of William Cattner(?) pretending to be the Messiah did not help the Protestant cause but they can not really be claimed as threats to the throne as the Queen got justice, the pretender lost his life. ...read more.