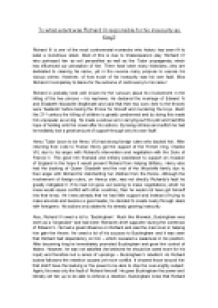 To what extent was Richard III responsible for his insecurity as King?

﻿To what extent was Richard III responsible for his insecurity as King? Richard III is one of the most controversial monarchs who history has seen fit to label a monstrous villain. Most of this is due to Shakespeare?s play ?Richard III? who portrayed him as evil personified as well as the Tudor propaganda, which has influenced our perception of him. There have been many historians, who are dedicated to clearing his name, yet in the reverse many propose to expose his vicious crimes. However, of how much of his insecurity was his own fault. Was Richard III completely to blame for the outcome of controversy to his name! Richard is probably best well known for the rumours about his involvement in the killing of the two princes ? his nephews. He declared the marriage of Edward IV and Elizabeth Woodville illegitimate and said that their two sons (heir to the throne) were ?bastards? before taking the throne for himself and murdering the boys. Much like 21st century the killing of children is greatly condemned and by doing this made him unpopular as a king. He made a serious error carrying out this plot and had little hope of holding onto the crown after his actions. ...read more.

It showed those around him that didn?t have the backing or the power to be able to stop the over-mighty subject. Again, this was only the fault of Richard himself. He gave Buckingham the power and literally set him up to be able to enforce a rebellion. Buckingham knew that Richard was in debt to him and could therefore push to get what he wanted knowing the king would not try to stop him. If Richard had been more forceful in dealing with this powerful noble it may have restored him some success. On the other hand, Richard had many strengths that aided him in reducing the amount of insecurity he had as king. During his reign Richard proved to be a capable and energetic king. In politics and government he was determined to stamp his authority on the kingdom by promising to outlaw corruption, restore peace and reform the legal system. By doing this he showed that he was putting in place actions which would make his country a better place ? this would have definitely got him a lot of credit. He also participated in government and moved around the kingdom to show himself to his subjects. ...read more.

Richard also took time to build amazingly structured halls, chapels and buildings. The way in which he embraced religion sent of a good message to his people ? it allowed them to look at him in a different light. By being accepted by the church and its followers gave Richard a guarded, strong support system as religion was a very powerful source! Overall, Richard did have a great input on his insecurities yet he did do many successful things, which helped to counteract them. Taking drastic measures, like killing the heir to the throne/his own nephews, meant that he lost A LOT of backing. Not only this but Henry Tudor and his foreign relations also aided him into feeling more insecure. Richard?s main problem was that he did not have a good following and this gave him great doubt and weakness throughout his reign. On the positive side he was an active outgoing king, with little opposition, yet he greatly lacked following (through his own fault) which diminished all value of his good deeds. If he had have had assistance from his people, doubled with his success, he could have been a great king! ...read more.