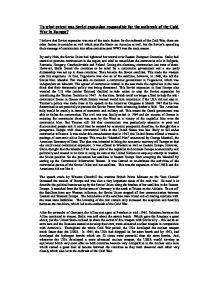 To what extent was Soviet expansion responsible for the outbreak of the Cold War in Europe?

To what extent was Soviet expansion responsible for the outbreak of the Cold War in Europe? I believe that Soviet expansion was one of the main factors for the outbreak of the Cold War, there are other factors to consider as well which puts the blame on America as well, but the Soviet's spreading their message of communism into other countries post WW2 was the main reason. By early 1946, the Soviet Union had tightened her control over Eastern European Countries. Stalin had started to promote communism in the region and tried to consolidate the communist rule in Bulgaria, Rumania, Hungary, Czechoslovakia and Poland. During the elections, communism lost most of them. However, Stalin forced the countries to be ruled by a communist government and a one party dictatorship was set up in these countries. They became the Soviet satellites. This made the western side felt suspicious. At first, Yugoslavia was also on of the satellites, however, in 1948, she left the Soviet bloc. Marshal Tito was able to maintain a communist government in Yugoslavia, which was independent on Moscow. The spread of communist control in the east made the capitalists in the west think that their democratic policy was being threatened. ...read more.

Stalin was told about the atomic bomb. Which gave the Russians a great shock, yet the United States refused to share the secret of this weapon with Soviet ally - this led to an arms race and the Russians started to develop their own, more advanced nuclear weapon in competition with America's. Throughout the whole Cold War period, the USA developed the nuclear weapon much faster than the USSR. In 1945, the USA had dropped its for atom bomb and by 1952, had developed the hydrogen bombs which are 52 times more powerful than the atom bombs. And, whenever the USA developed a more advanced nuclear weapon, the USSR would develop an equivalent bomb very soon after so both countries became very competitive in the nuclear arms race which caused a great deal of tension between the countries as they both observed each other very closely which also let to the outbreak of the Cold War. Soviet expansion and its message of communism was a large factor in the Cold War but there are other factors to consider as well such as the ideological differences between the two countries. The Soviet Union had had a communist government since 1917 after the October Revolution. ...read more.

In conclusion, the Soviet expansion was a major factor of the outbreak of the Cold War and was to a large extent. However this is because of the Soviet's desire to spread its message of communism mainly as well as its want to occupy land. Fear of communism is the reason why Marshall aid and the Truman Doctrine was introduced which aroused a lot of suspicion and tension between America and Russia and is also one of the reasons America kept its atomic bombs secret from the Russians which led to the arms race. I believe these were the catalyst for the Cold War but they only happened as reaction against the threat of the USSR's expansion of communism and so if had these events not happened, perhaps wouldn't have been enough mistrust and suspicion between the two countries to justify the outbreak of the Cold War. Of course, there were other major factors responsible such as that the two super powers were only interested in their own interests, they had many ideological differences and were bound to not get along, they were both involved in the Berlin Blockade and Airlift, both countries should have resolved better at the Summit conferences and communist and Capitalists are totally different. But I believe the expansion of communist Russia was the major cause of the Cold War. Sion Brooks 13.4 ...read more.