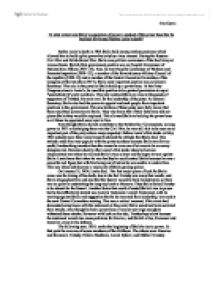 To what extent was Stalin's acquisition of power a product of the power base that he had built for himself before Lenin's death? Before Lenin's death in 1924 Stalin held many pointless positions which allowed him to build up his power but only by a tiny amount. During the Russian Civil War and Polish-Soviet War, Stalin was political commissar of the Red Army at various fronts. Stalin's first government position was as People's Commissar of Nationalities Affairs (1917-23). Also, he was People's Commissar of Workers and Peasants Inspection (1919-22), a member of the Revolutionary Military Council of the republic (1920-23) and a member of the Central Executive Committee of the Congress of Soviets (from 1917). Stalin most important position was as General Secretary. This role in the party let Stalin build up a power base. At the Party Congress close to Lenin's, he used this position to be granted permission to expel "unsatisfactory" party members. This later enabled Stalin to remove thousands of supporters of Trotsky, his main rival for the leadership of the party. ...read more.

Lenin's Testament, with its warning against Stalin and suggestion that he be removed from leadership, was read at the next Central Committee meeting. This was a critical moment, if his rivals had demanded compliance with the testament at this point, Stalin would not have survived their attacks, even though he had a power base it was not yet large enough to withstand these attacks. However with luck on his side, Trotsky kept silent because the testament would also cause problems for him too, and Stalin's allies, Kamenev and Zinoviev, came to his defence. The following year, 1924, marks the beginning of Stalin's rise to power. At that point he was one of seven members of the Politburo. The others were Zinoviev and Kamenev, Trotsky, Nikolai Bukharin, Alexei Rykov, and Mikhail Tomsky. Stalin's amazing success can be attributed to a combination of his own political genius and the mistakes that his rivals persisted in making. Luck may have been a massive part in Stalin acquisition of power but you cannot forget his political aptitude. In December 1924, Stalin first articulated his own twist on Marxist orthodoxy, which he termed "Socialism in One Country." ...read more.

Kalinin and Vorishilov joined the Politburo, and the suddenly weakened Kamenev and Zinoviev turned to Trotsky for support, forming a "United Opposition" in the summer of 1926. But they were no match for the Bukharin-Stalin alliance. By the time of the next Party Congress, in October of 1926, Zinoviev and Kamenev had been removed from the Politburo, and Stalin felt secure enough in his power to urge the Party's official repudiation of their views as "anti-Leninist." Trotsky resisted, and in 1927 he was expelled from the party and exiled to Central Asia; Zinoviev and Kamenev, defeated, begged for clemency, which the Politburo granted. Stalin was triumphant--now, even his ally in this struggle, Bukharin, grew nervous, as he realized that Stalin's power in the Party now overshadowed even his own influence. Overall there were many factors that helped Stalin's acquisition of power but I do not believe that the base of power he had before Lenin's death was the most important reason. Without luck or having the right political I am certain Stalin wouldn't have been able to build up so much power in such a short period of time, let alone survived Lenin's Testament. ?? ?? ?? ?? Tim Currie ...read more.