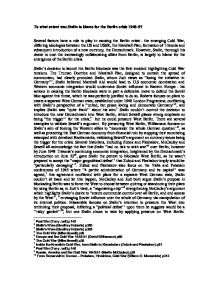 To what extent was Stalin to blame for the Berlin crisis 1948-9?

To what extent was Stalin to blame for the Berlin crisis 1948-9? Several factors have a role to play in causing the Berlin crisis - the emerging Cold War, differing ideologies between the US and USSR, the Marshall Plan, formation of Trizonia and subsequent introduction of a new currency, the Deutschmark. However, Stalin, thorough his desire to oust the increasingly collaborating allies from Berlin, is largely to blame for the emergence of the Berlin crisis. Stalin's decision to launch the Berlin blockade was the first incident highlighting Cold War tensions. The Truman Doctrine and Marshall Plan, designed to contain the spread of communism, had clearly provoked Stalin, whom Judt views as "losing the initiative in Germany''1, Stalin believed Marshall Aid would lead to U.S economic domination and Western economic integration would undermine Soviet influence in Eastern Europe - his actions in causing the Berlin blockade were in part a defensive move to defend the Soviet bloc against this threat, which he was perfectly justified to do so. Roberts focuses on plans to create a separate West German state, established under 1948 London Programme, conflicting with Stalin's perspective of a "united, but peace loving and democratic Germany''2, and implies Stalin was "quite frank'' about his aim.3 Stalin couldn't control the decision to introduce the new Deutschmark into West Berlin, which Sewell places strong emphasis on being "the trigger'' for the crisis,4 but he could pressure West Berlin. There are several examples to validate Sewell's argument. By pressuring West Berlin, Williamson focuses on Stalin's aim of forcing the Western allies to "reconsider the whole German question''5, as well as protecting the East German economy from financial ruin by stopping their zone being swamped with devalued Recihsmarks, validating Sewell's argument on currency issues being the trigger for the crisis. Several historians, including Zubok and Pleshakov, McCauley and Sewell all acknowledge the fact that Stalin "had no risk to wish war"6 over Berlin, however by June 1948 Trizonia's continuing economic integration, heightened by the Deutschmark's introduction on ...read more.

Whereas Stalin wanted a buffer of friendly states, and a repeat of the crippling reparations seen in Versailles, the Americans wanted a democratic, capitalist Germany as a trade partner strong enough to halt the spread of communism. Once Germany and its capital had been divided into four, conflict was inevitable, the two superpowers had achieved their shared aim of defeating Hitler and ideologies were far too differing, especially concerning the economy. Economic policy such as Marshall Aid and introducing the Deutschmark were clearly designed to affect the Soviet economy, and subsequent Soviet actions ultimately led to conflict. This inherent conflict between Russia and America meant that the two sides could never permanently resolve their differences. That is why the West could only contain Soviet expansionist efforts, and partially explains why the Berlin crisis occurred. Despite Stalin's actions being the catalyst for the Berlin crisis unfolding, Stalin and his regime were not solely to blame. The actions of both the Americans and the British in ensuring Western occupied territory did not slip behind what Churchill famously described as the 'iron curtain' had an impact; however Zubok and Pleshakov place emphasis on political parties such as the SED who also pressured Stalin into acting. Leading SED politician William Pieck had grave concerns the next elections in Berlin could end in "a humiliating defeat'' for his party, and that such a result could be averted "if one could remove the allies from Berlin''. Stalin responded to this claim by stating "Let's make a joint effort, perhaps we can kick them out''14. The prospect of communist authority being challenged from within the Soviet zone raised considerable fear not only for the Soviets, but for SED leaders, this is a good example to validate their argument. Western demands for free elections and competitive markets seemed unnecessary and dangerous to both Moscow and the SED.15 McCauley also focuses on Stalin's emissaries in Berlin who reported they "expected the airlift to fail''16, which may have put further pressure on Stalin to ...read more.

Bevin was "alarmed at the waxing of communist influence''23 and consistently worked to undermine Soviet ambitions for German unification, rejecting proposed agreements at the 1947 Moscow Conference, the last American effort to fully cooperate with the Russians, however McCauley goes on to argue other events had a greater significance, namely the incompetence of Stalin and the Soviet regime. Bevin believed that Stalin wished to make the whole of Germany communist, in 1948 Prime Minister Atlee approved a foreign office paper, to be used in preliminary discussions with the Americans and which Ovendale implies to be ''endorsed by Bevin''24. Ovendale's argument focuses on this paper which stated the Soviets "had established themselves solidly in Eastern Europe, and from that secure entrenchment they were trying to infiltrate the West''24. Bevin, like most of the West, failed to understand how badly Russia had suffered during the war, mistaking Soviet fears of a resurgent capitalist Germany. Ovendale focuses on Bevin's preparation to accept division within Europe "as early as 1946'', but ''it had to appear that the Russians were to blame''24, There are several limitations to Ovendale's argument as Stalin's actions meant this was unnecessary, however it does established Bevin was prepared to take action himself. Despite primarily being Stalin's fault, Britain is not blameless in causing the Berlin crisis. However since Britain was a main beneficiary of Marshall Aid, they were in debt to America. Britain's role amounted to little more than supporting the Americans, and has a very small role in causing the Berlin crisis, despite putting more pressure on Stalin. The Berlin crisis of 1948-9 was ultimately the fault of Stalin. Despite having legitimate concerns to the re-emergence of a capitalist Germany, heightened by American anti-communist action such as the Truman Doctrine and the Marshall Plan, his actions far outweighed the circumstances. Despite pressurisation from his Soviet regime, communist parties within the satellite states, and the Western Powers, Stalin's actions were the main catalyst for the crisis unfolding. ...read more.