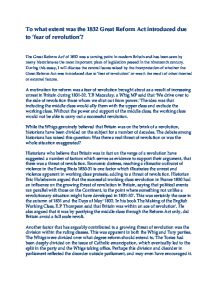 To what extent was the 1832 Great Reform Act introduced due to fear of revolution?

To what extent was the 1832 Great Reform Act introduced due to 'fear of revolution'? The Great Reform Act' of 1832 was a turning point in modern Britain and has been seen by many historians as the most important piece of legislation passed in the nineteenth century. During this essay, I will discuss the central issues raised by the interpretation of whether the Great Reform Act was introduced due to 'fear of revolution' or was it the result of other internal or external factors. A motivation for reform was a fear of revolution brought about as a result of increasing unrest in Britain during 1831-32. T.B Macaulay, a Whig MP said that 'We drive over to the side of revolution those whom we shut out from power.' The idea was that including the middle class would ally them with the upper class and exclude the working class. Without the power and support of the middle class, the working class would not be able to carry out a successful revolution. ...read more.

He also argued that it was by pacifying the middle class through the Reform Act only, did Britain avoid a full scale revolt. Another factor that has arguably contributed to a growing threat of revolution was the division within the ruling classes. This was apparent in both the Whig and Tory parties. The Whigs were divided over what degree reform should extend to. The Tories had been deeply divided on the issue of Catholic emancipation, which eventually led to the split in the party and the Whigs taking office. Perhaps this division and disorder in parliament reflected the disorder outside parliament, and may even have encouraged it. The campaign for reform among the middle and working classes was a very well organised movement. Political unions were established throughout the whole of Britain, all determined to secure reform. This movement would have included the majority of the population, and a range of effective radical tactics most of which involved violence. Widespread support for the reform campaign, led to outbreaks of rioting all over the country. ...read more.

Thirdly there were divisions within the protest movement itself. Rivalry between various political unions existed as well as a conflict of opinion between middle class lead unions and working class lead unions. This was especially evident in London between the National Political Union (NPU), led by Place and the National Union of the Working Classes (NUWC), led by William Lovett, Henry Hetherington and John Cleave. Place called for and supported class collaboration while the NUWC used virulent class language which outraged middle class reformers'. Place did his utmost to ostracise extremists from the council of the NPU and the leaders of the NUWC branded him a traitor to his own class. Furthermore, there were divisions with the working class movement and in the NUWC. Some rejected the Bill as it offered nothing to the working class, while others, most notably radical William Cobbett, were prepared to support the Whigs' Reform as the first step to universal suffrage, taking the view that half a loaf would be better than none'. ...read more.