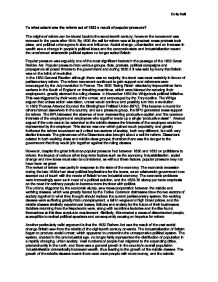 To what extent was the reform act of 1832 a result of popular pressure? The origins of reform can be traced back to the seventeenth century; however the movement was renewed in the years after 1815. By 1830 the call for reform was at its greatest; mass protests took place, and political unions grew in size and influence. Social change, urbanisation and an increase in wealth saw a change in people's political ideas and the economic state and industrialisation meant the unreformed aristocratic political system no longer suited Britain. Popular pressure was arguably one of the most significant factors in the passage of the 1832 Great Reform Act. Popular pressure from various groups, riots, protests, political campaigns and propaganda all posed threats to the government and during 1830-2 it was said by many that Britain was on the brink of revolution. In the 1830 General Election although there was no majority, the trend was most certainly in favour of parliamentary reform. The reform movement continued to gain support and reformers were encouraged by the July revolution in France. The 1830 'Swing Riots'- attacks by impoverished farm workers in the South of England on threshing machines, which were blamed for reducing their employment- greatly alarmed the ruling classes. In November 1830 the Whigs took political initiative. This was triggered by their worry of the unrest, and encouraged by the Tory decline. ...read more.

Soldiers returning from the Napoleonic wars, along with munitions factories and the like found themselves at this time surplus to requirement. Similarly, this created a mass of discontented people, susceptible to radical political speakers and consequently causing an impetus for reform. Another particularly valid argument is that the 1832 Reform Act was the result of the vast social change Britain saw from the middle of the eighteenth century onwards. The industrialisation of Britain began to produce social unrest; which appeared to undermine the unresponsive political system. The system, created in the pre-industrial age, no longer fairly represented the distribution of population in a rapidly changing, urban society. Vast numbers of people had migrated to the expanding cities, predominantly in the north, and there was a general growth in the country's overall population. Industrialisation dramatically increased wealth, thus leading to the growth of the middle classes. The growth of the middle classes meant there were more people with more money, and the middle classes felt as their input into the country's economy was increasing, they should have more of a say in governmental and political affairs. From the late 18th century onwards the middle classes became increasingly aware that the old political system, dominated by landed aristocratic interests, was desperately in need of reform. Similarly, the working classes also became more politically aware, and both groups felt that as they were contributing more to the wealth of the country, reform should take place so they were better represented. ...read more.

Bentham argued parliament should be efficient and of benefit not just to small numbers but to as many people as possible, and therefore as the unreformed system clearly left large numbers of people unsatisfied, it should be reformed. A group called the Radicals called for the most extensive reforms. Despite government persecution radical publications, most notably the works of Thomas Paine (Rights of Man) were widely distributed and spread the reform movement even further. It is argued by many that the ideological pressure on the government was particularly powerful, most notably the Enlightenment movement. Several other outstanding individuals, such as William Cobbett and Henry Hunt also a achieved a large following Without the amount of popular pressure that took place prior to the 1832 reforms, political reform may have taken much longer to be put in place. However, although popular pressure was an important factor, if Britain had not been in the process of industrialisation, there would not have been nearly as much of a call for reform. The state of the economy simply did not fit with the aristocratic political system, therefore it could be argued that social change and the changing state of the economy was the most important factor in why reform came about. However, it is on the other hand arguable, that due to the fact that the popular pressure almost resulted in revolution, it frightened politicians into reforming. Without popular pressure, therefore, reform may have been much later and a much slower process. ?? ?? ?? ?? Emily Kaill ...read more.