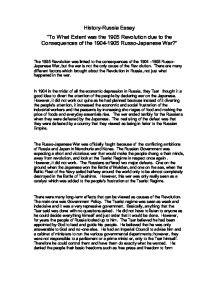 History-Russia Essay "To What Extent was the 1905 Revolution due to the Consequences of the 1904-1905 Russo-Japanese War?" The 1905 Revolution was linked to the consequences of the 1904-1905 Russo-Japanese War, but the war is not the only cause of the Revolution. There are many different factors which brought about the Revolution in Russia, not just what happened in the war. In 1904 in the midst of all the economic depression in Russia, they Tsar thought it a good idea to divert the attention of the people by declaring war on the Japanese. However, it did not work out quite as he had planned because instead of it diverting the people's attention, it increased the economic and social frustration of the industrial workers and the peasants by increasing shortages of food and making the price of foods and everyday essentials rise. The war ended terribly for the Russians when they were defeated by the Japanese. The real sting of the defeat was that they were defeated by a country that they viewed as being inferior to the Russian Empire. The Russo-Japanese War was officially fought because of the conflicting ambitions of Russia and Japan in Manchuria and Korea. ...read more.

Any and all protests against the Tsar were repressed, usually by force. The workers had many grievances, including, that they had to work long hours while they were on low pay and the fact that they had terrible living and working conditions. There were many deaths due to accidents and health problems that had come about because of the type of work they were doing. They all lived in shared rooms in tenement blocks or in barrack-styled buildings next to the factory or mine in which they worked. The men, women and children all lived together in one room divided only by curtains. No one had any privacy. The working class were becoming more and more educated because of the policy of modernisation and they were starting to voice their opinions on matters of what the government was doing. This was going to become dangerous to the stability of the government. The middle classes, or liberals, believed that they should have a say in what the government did and how the country was ran. They wanted to have a parliamentary style government that would then reduce the Tsar's powers. They wanted to turn him into a more Constitutional Monarchy. ...read more.

This was all starting to add up. It was obvious that a Revolution was going to happen very soon. Finally there was the ignition spark. On Sunday 22 January 1905, the Tsar's troops fired on peaceful protestors outside the Winter Palace in St. Petersburg. The government troops opened fire on a procession of peaceful, unarmed demonstrators carrying a petition to be presented to the Tsar. Several hundred people were killed and the incident, which came to be known as Bloody Sunday, marked a turning point. For most of 1905 the Tsar was at war with his own people and strikes, peasant uprisings, petitions, riots and demonstrations happened very regularly throughout the year. The consequences of the Russo-Japanese war were basically the catalysts that made the revolution happen earlier that it might have if Russia had not gone to war. Many other factors were part of the reason for the revolution, and the Bloody Sunday incident was really the spark that set the whole thing off. Therefore, the consequences of the Russo-Japanese war were very much one of the biggest reasons for the 1905 Revolution. If the Russians had not declared war, then they may never have had to deal with the Revolution. Things may have gotten better by themselves. ?? ?? ?? ?? ...read more.