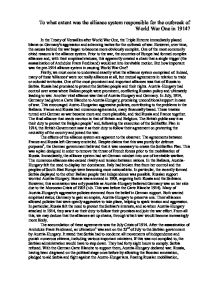 To what extent was the alliance system responsible for the outbreak of World War One in 1914? In the Treaty of Versailles after World War One, the Triple Entente immediately placed blame on Germany's aggression and scheming tactics for the outbreak of war. However, over time, the causes behind the war began to become more obviously complex. One of the most commonly citied reasons is the alliance system. Prior to the war, the countries of Europe had formed complex alliances and, with their empirical statuses, this apparently created a chain that a single trigger (the assassination of Archduke Franz Ferdinand) would set into inevitable motion. But how important was the pre-1914 alliance system in causing World War One? Firstly, we must come to understand exactly what the alliance system comprised of. Indeed, many of these 'alliances' were not really alliances at all, but mutual agreements in relation to trade or colonial territories. One of the most prominent and important alliances was that of Russia to Serbia. Russia had promised to protect the Serbian people and their rights. Austria-Hungary had control over areas where Balkan people were prominent, conflicting Russian policy and ultimately leading to war. Another vital alliance was that of Austria-Hungary and Germany. ...read more.

In particular, Russia felt the need to protect the Serbian's interests, and so when Austria-Hungary attacked in 1914, they saw it as their duty to follow their promises and join the war effort. From all this, we may deduce that the alliances set up chains, through which war would become increasingly more likely. The accumulation of these agreements was the July Crisis of 1914. After the assassination of Archduke Franz Ferdinand, an ultimatum3 was sent on the 23rd of July to the Serbian government by Austria-Hungary. It stated that Serbia had to condemn all movements of independence and punish numerous citizens, including various important ministers. If this was not complied to, the Serbian administration would have to step down. They had forty eight hours to comply. Serbia refused. With the German Carte Blanche to support them, Austria-Hungary declared war. Russia, having been disgraced on the political stage once before by allowing the Bosnian annexation, pledged to aid Serbia and fight against the Austro-Hungarians. Fearing Russian mobilization, Germany launched the Schlieffen Plan, bringing France into the war. By moving through Belgium, Britain said they had broken their pledge of neutrality and joined France and Russia, relying on the Entente Cordiale4 to create the Triple Entente. In this way, we can see that the alliance system did have big implications. ...read more.

Any anti-German sentiments in the alliance system appeared after they had been formulated, especially after incidents such as the Moroccan Crises. It is not right, therefore, to place the entirety of the blame of World War One on the alliance system. And so, how important was the alliance system in causing the outbreak of war in 1914? It is fair to say that the alliance system operated on two levels. Firstly, the Carte Blanche from Germany to Austria-Hungary encouraged aggressive foreign policies, leading to the attacks on Serbia and angering other nations. Secondly, the alliance system acted as an excuse for various nations to engage in war whilst hoping for support from their 'allies'. However, the most important cause of World War One is not the alliance system, but Russian pride. If the Russians had not agreed to fight with Serbia, Germany would not have executed the Schlieffen Plan, thus France and Britain would never have been involved. Therefore, the alliance system acted more as an excuse for the European powers' actions, rather than act as a cause. Sources 1 Telegram August 1st 1914, Sir Edward Grey (Foreign Office) to Sir E. Goschen, No. 256 2 www.ww1accordingtobob.com/wcE.php 3 www.wwi.lib.byu.edu/index.php/The_Austro-Hungarian_Ultimatum_to_Serbia_%28English_translation%29 4 http://history.howstuffworks.com/world-war-i/triple-entente.htm 5 Seton-Watson, Hugh; The Decline of Imperial Russia, Butler & Tanner LTD, 1964 (pg. 118) 6 Seton-Watson, Hugh; The Decline of Imperial Russia, Butler & Tanner LTD, 1964 (pg. 155) ...read more.

This is a well balanced and thorough response that stays focused on the question throughout and demonstrates excellent knowledge. The author should avoid asking rhetorical questions and advance judgments at the start of paragraphs instead.