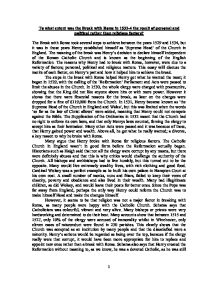 To what extent was the Break with Rome in 1532-4 the result of personal and political rather than religious factors?

To what extent was the Break with Rome in 1532-4 the result of personal and political rather than religious factors? The Break with Rome took several steps to achieve between the years 1529 and 1534, but it was in those years Henry established himself as 'Supreme Head' of the Church in England. The meaning of the break was Henry's decision to declare himself independent of the Roman Catholic Church and is known as the beginning of the English Reformation. The reasons why Henry had to break with Rome, however, were due to a variety of factors; personal, political and religious matters. This essay will discuss the merits of each factor, on Henry's part and how it helped him to achieve the break. The steps in the break with Rome helped Henry get what he wanted the most; it began in 1529, with the calling of the 'Reformation' Parliament and Acts were passed to limit the abuses in the Church. In 1530, the whole clergy were charged with praemunire, showing that the King did not like anyone above him or with more power. ...read more.

Schama claims that she was 'historical prime cause number one' of the reformation, but I think that the need of Henry wanting a divorce was the ultimate prime cause. Eric Ives says that Henry was thinking of divorce before he had decided to pursue a relationship with Anne, and this could prove to be true as Catherine, as said by Henry's doctors, would produce no heir as early as 1524. Anne could be regarded as the catalyst of the divorce, but not a 'number one cause' of the break with Rome, as many Historians argue. Another reason to why Henry would break with Rome could be the fact that he would gain more power, and if that, would be secure on the throne more than ever. His aims were to re-establish his territories as a 'sovereign empire', and this would certainly make sure that no other ruler would have control of anything. Henry was a very stubborn man, always got what he wanted and he was unwilling to let anybody - the Pope, Wolsey, More or Cromwell - get in his way or tell him what to do. ...read more.

This is what is believed to be the key reason to break with Rome. This moves from personal to a more political reason as Henry could be confident to have a male heir, for dynastic purposes. I don't think Henry's love for Anne was much of an important personal reason as he could fall in love with anyone at anytime - but as long he got what he wanted and that was sons. Haigh argues that the break away from Rome was mainly political motivation. This appears to be true as well. With help from his fixer, Cromwell, the supremacy of the Papacy over the Church in England was ended. Henry became in charge of all matters of belief and organisation, and he became the Supreme Head of the Church. The Dissolution of the Monasteries helped Henry gain more land and wealth for financial purposes. Religion plays a very small part; Henry may have used it as a back up for his greed, concerning the dissolved monasteries, saying that he was to clean it up instead of abolishing it, but eventually ended up being wealthier. Henry got more than he wanted in the finale, and this was just the beginning of Protestantism. WORD COUNT: 1979 1 ...read more.