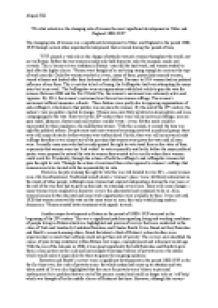 ﻿Abigail Hill 7To what extent was the changing role of women the most significant development in Wales and England 1880-1929? The changing role of women was a significant development in Wales and England in the period 1880-1929 through several other important developments that occurred during this period of time. WW1 played a vital role in the change of attitudes towards women throughout the world, not just in Britain. Before the war women usually only held domestic roles for example, maids and servants. This is because it was tradition in Britain - men did the hard work, and women tended to look after the higher classes. Women were thought of as not being strong enough to carry out the type of work men did. Only few women worked as it was, many of them, particularly married women, stayed at home and looked after their husbands and children. Previous to 1914 women had no political influence of any form. This is not due to lack of trying, the Suffragettes had been attempting for many years but to no avail. The Suffragettes were an organisation established solely to gain the vote for women. Between 1890 and the First World War, the woman?s movement was extremely active and vigorous. By 1914, the women?s movement was focused on women suffrage. The women?s movement suffered numerous setbacks. These failures were partly due to opposing organizations of anti-suffragists, who believe that politics was no place for women. ...read more.

However, although the surveys conducted were important, it wasn?t the most important factor during 1880-1929. When the Liberal governments came into power in 1906 ? around the time of Booth and Rowntree?s surveys, they didn?t have a detailed programme of social reforms already drawn up. Once in power it was obviously highlighted that the intensity of poverty and the problems that came along with it had to urgently be taken cared off in order to help the children, sick, elderly and the unemployed of Britain that were labelled as living under the poverty line (Decided upon the reports of Booth and Rowntree). The Liberals were worried about the growth of the Labour Party that had sprung up from the working class sector of society, under the leadership of Kier Hardie and dedicated to improving the lives and working conditions of the working class. The Labour Party said that people should have pensions, education and unemployment benefits given to them by the government - this was very popular with the working class. The Liberals were worried that the working class would now vote for the Labour Party rather than itself. The Liberal government had to be seen to be helping working class people in order to secure their votes against the Labour Party. These included, free school meals, school medical services, borstals, children courts, poor relief, private pensions, work houses and labour exchanges for the unemployed. ...read more.

The government took over mines to make sure that enough coal was produced for the war and not just to make money for the owners. They also controlled licensing hours, rationing, British summer time and also diluted beer so workers were sober for the next working day. Limitations were that some people saw DORA as infringing on the nation?s civil liberties. Another factor included the munitions crisis. By 1915 the army was short of munitions as not enough was being made, the daily mail first reported the problem and people were furious that soldiers were fighting without proper equipment. So, a coalition government was formed to try and solve the problem. This links in with DORA as Lloyd George used DORA to work were they were needed rather than were they could get best pay, many trade unions were angry about this and protested. Though some people who held Liberal principles saw DORA as an infringement of the nation?s civil liberties, the introduction of the conscription act in 1916 for example, was viewed as a great intrusion into the lives of ordinary men, DORA was effective in ensuring that the labour force was working at maximum output, as what was needed during times of total war. DORA has been the most significant was it affected all aspects of life in Britain. It marked the beginning of ?big government? which saw the role that government plays in the lives of people in Britain increases more and more. ...read more.