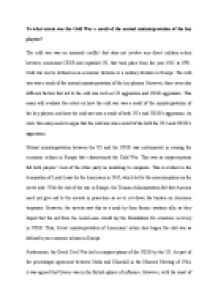 To what extent was the Cold War a result of the mutual misinterpretation of the key players?

Cold war was also a result of US?s aggression through the dollar diplomacy. It is the use of economic means to gain political concessions. An example of dollar diplomacy by the US would be when the US imposed the conditions of dropping trade barriers in Eastern Europe and compensation for US assets seized in Romania and Bulgaria on a request by the USSR for a loan of $6 billion in January 1946. This had led to the soviet failure in joining the International Monetary Fund (IMF) and the World Bank, which US had hoped to be able to construct an economic market to promote economic growth in December 1945. By June 1946, all negotiations over loans ended. The fact that the Soviets refused to join the World Bank was signaling their refusal to participate in the reconstruction of the global economy. This marked the beginning of economic schism, which can be characterized as cold war. ...read more.

It was obvious that Iran was not crucial to soviet?s security concern, but instead, USSR was trying to find a warm water port. It was perceived by the US that without legit reasons to expand, this was a clear soviet aggression. Therefore, this had increased tension and suspicion between USSR and US. Thus, it was due to the Soviet Aggression that had led to the deepening of the mutual misinterpretation and that the cold war was also a result of the Soviet?s aggression. Therefore in conclusion, mutual misinterpretation only resulted in deepening the existing mistrust and had further escalated the tension between the key players. However, it was the aggression of both US and USSR that caused the birth of mistrust and tension. The aggression of US and USSR had led to the mutual misinterpretation between the key players. Thus, it was the aggression of US and USSR, backed by their irreconcilable ideologies, caused the economic schism and accelerated the armed race, which the cold war can be characterized as. Therefore, the Cold war was a result of the mutual misinterpretation of the key players to a small extent. ...read more.