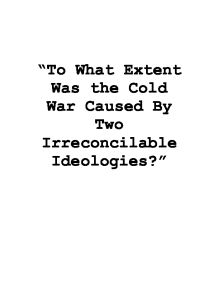 &quot;To what extent was the cold war caused by two irreconcilable ideologies?&quot;

"To What Extent Was the Cold War Caused By Two Irreconcilable Ideologies?" The Russian-American history is not very old, yet it was started off on a bad note in the Russian Revolution. Communism, which draws its power from the lower classes, stands in direct opposition to Capitalism which necessitates the satisfaction of the upper classes in order to be successful. However, history forced the two ideologically conflicting countries to work together to secure peace, and lay their differences aside -for the time being. As World War Two was coming to an end, Russia and the U.S both wanted to shape the European situation after their respective ideologies. This essay will examine to which extent the irreconcilability of these two ideologies was the cause of the Cold War. The first time, the U.S intervened in Russian affairs actively, was in the Russian Revolution, they fought against communism, on the side of the "White Army". The victorious army however, turned out to be the Communist Red Army. So clearly, Russia and America were off to a bad start. As much as their ideologies may be contradictory, in World War One Americans and Russians fought side by side, forgetting disagreements became easy, when their was a common enemy. After World War One, when Russia expanded its territories, taking the land it thought would do better under the hands of communism, America became very aware of this eastern giant again. ...read more.

Thus the U.S. assumption, that this was an indication of communisms ambitious expansinism, was merely a misinterpretation of facts. On the contrary, it can also be said that Russia, and with it communism, really did have the intention to spread, seeing the ideal conditions for communism in the weak eastern European countries. Either way, the problem lies within the ideologies, which here have either lead to an act of aggressive expansion, or caused irrational mistrust in the other. From this point on, mistrust had arisen, and the struggle for influence had begun. Both Russia and the U.S now thought they knew, of what to expect from each other, and would oppose everything with great skepticism. After it became clear, that Stalin had not stuck to the agreement at Yalta, not to interfere in the Polish elections, this was another clear message that to the allies, Russia and communism could not be trusted. At this point, it might seem fairly obvious that the Russians, and communist ideologies were to blame for the Cold War, yet one must consider the following: Russia had been involved in constant conflicts for almost have a century (if this be Revolution or War), of course this leaves marks, and makes a country distrustful. So the Russians were already mistrustful of the Americans ever since their involvement in the Russian revolution. This aversion against the west, and especially the U.S did not exactly decrease with the exclusion of Russia from many World War Two conferences and the late entry of the U.S. ...read more.

By 1947 this "phenomenon", (known now as the domino effect) that the U.S. feared more and more countries would one by one fall to communism, had reached its peak. Truman wanted to put an end to this, and prevent communism from spreading, so he devise the Truman doctrine. In this doctrine he openly proclaimed the U.S.S.R the enemy, and developed the "Containment" plan. This is considered the official start of the Cold War. Conclusively, I believe the ideologies of the U.S. and the U.S.S.R where responsible for the outbreak to a big extent. Yet the way that I see it, it was more a matter of the U.S. wanting to "contain" communism, than Russia wanting to spread communism throughout the world. From my perspective, Communism and Capitalism (or Democracy) are not able to co-exist, especially when projected on to such big countries like the U.S. and Russia, conflict is virtually predetermined. This is because their views on economics and politics are too fundamentally different, as to ever being able to accept the other. Thus it would be absurd to assume they did not play any part in the foundation for the "Cold War". It was the difference in ideologies, that was the driving factor in Russian-American history; the Russian Revolution, the establishment of friendly satellite countries (where friendly meaning communist, and Russia orientated here), the "containment" of communism. Thus, I conclude that the irreconcilable ideologies of Russia and America were responsible to a high degree and without them, the Cold War would most likely not have occurred ...read more.