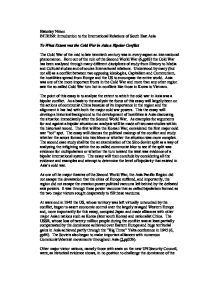 To What Extent was the Cold War in Asia a Bipolar Conflict?

Blakeley Nixon INTR299: Introduction to the International Relations of South East Asia To What Extent was the Cold War in Asia a Bipolar Conflict The Cold War of the mid to late twentieth century was in every aspect an international phenomenon. Born out of the ruin of the Second World War (6,pp83) the Cold War has been analysed through many different disciplines of study from History to Media and Cultural studies and of course International relations. Understood by many (but not all) as a conflict between two opposing ideologies, Capitalism and Communism, the hostilities spread from Europe and the US to encompass the entire world. Asia was one of the more important fronts in the Cold War and more than any other region saw the so called Cold War turn hot in conflicts like those in Korea to Vietnam. The point of this essay is to analyse the extent to which the cold war in Asia was a bipolar conflict. As a basis to the analysis the focus of this essay will largely been on the actions of communist China because of its importance in the region and the alignment it has had with both the major cold war powers. ...read more.

The complexities of the conflict are not the focus of this essay but in an argument for and against bipolarity the Korean War must be considered. South Korea had gradually become a central feature of Truman's "Containment" policy, an international policy that attempted to territorially surround the Communist bloc that had by this point consumed the bulk of Eurasia (5, pp48). The Soviets and Chinese supported (encouraged) North Korean invasion of South Korea began in June 1950 under the orders of a government that believed the invasion could be completed in three days avoiding American intervention. However, due to the current political situation in the US Truman, afraid of being seen as being soft on communism after his failure to support Chang's nationalist on Formosa (Taiwan)(3, pp192), ordered American troops to enter the battle from Japan by the end of the month (5, pp49). The UN Security Council, boycotted by the USSR, the only communist country with a veto, because of the refusal of the UN to recognise the PRC, commenced its first deployment of troops since its creation. Despite the immediate American and eventual UN involvement, North Korean troops managed to invade as far south as what became to be known as the Pusan perimeter. ...read more.

China's continued claim over Taiwan and its actions during the Tiananmen Square massacre suggest that China developed a greater level of independence and sovereignty suggesting that it had finally emerged as the third power in Asia's Cold War front. To conclude this essay it must be first said that to properly analyse the events in Asia's cold would take far more than a 2000 word essay. To answer the question "to what extent was the cold war in Asia bipolar" this essay focused on China. Analysing China's involvement in the cold war suggests that the conflict was in its early stages bipolar. The domination of the USSR over most states in the communist bloc and a similar situation with the US and the west is evidence of this. However as the conflict exploded in Korea the complexities of the Asian region gradually began to degrade the bipolar form as China emerged on to the scene as a challenge to the dominance of both the US and USSR in the region. In a concluding analysis it can be said that internationally the Cold War may have very well been a bipolar conflict, but on a regional level, Asia's cold war was a far more complex system. ...read more.