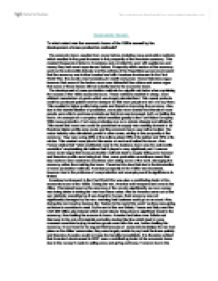 To what extent was the economic boom of the 1920s caused by the development of mass production methods?

Economic Boom. To what extent was the economic boom of the 1920s caused by the development of mass production methods? The economic boom resulted from many factors, including mass production methods which resulted in the great increase in the prosperity of the American economy. This created thousands of jobs for Americans and provided the poor with appliances and money they had never experienced before. Prosperity within sectors of the economy such as the automobile industry and the policies of the Republican government meant that the economy was further boosted and with Americas involvement in the First World War, the country was increasing in wealth and power. Some historians argue however that some of the factors were more influential than others and some argue that some of these factors did not actually lead to the economic boom. The development of mass production methods is a significant factor when explaining the causes of the 1920s economic boom. These methods resulted in cheap, more efficient manufacture of goods which was largely standardised. This meant products could be produced quicker and for cheaper so that more people are able to buy them. ...read more.

However due to the damage the war caused to the receivers of the loans, America were unlikely to be paid back quickly. It can be argued overall that the war played a more significant role than the introduction of mass production methods due to the improvement made on the economy being more significant. The Republican government polices in America in the 1920s also played a significant role in the economic boom. The government adopted the policy of laissez-faire, one in which there is little government intervention in the lives of the people, which enforced the idea that businessmen, if left alone, could turn out higher profits and believed that more jobs and higher wages would be the result. They restored free enterprise after their intervention during the war which allowed more competition. This meant lower prices on goods and therefore more sales were made, boosting the economy. The government also made attempts at balancing the budget by cutting government spending down to equal the amount raised in revenue in taxes. This meant that more money could be kept and spent and therefore the economy benefited. Also, the government fuelled the boom further with introductions of higher tariffs through the Fordney-McCumber Act in 1922. ...read more.

Also, due to America's involvement in WW1, they made billions of dollars in selling arms and giving out loans to the Allies when in need, meaning they put a lot of money into the economy suggesting that it is arguably more influential than the mass production methods. However, due to the damage the war caused in Europe, many of the countries were unable to pay back the loans immediately meaning the US were losing out on money rather than gaining. Due to the policies of the American Republican government, the country was better off in many aspects with them balancing the budget and raising tariffs on foreign goods, improving the economy. However countries counteracted this by raising tariffs on American goods, damaging the economy and the governments significance is limited due to the focus on the higher classes. Also, with the introduction of credit, the economy was fuelled as more people are able to buy goods they otherwise would not have been able to afford, however the possibilities of people becoming over-stretched or losing their jobs were apparent and therefore it was arguably not as influential as mass production methods. Overall, the significance of the mass production methods is clear, however other, some arguably more important, factors were an influence. ...read more.