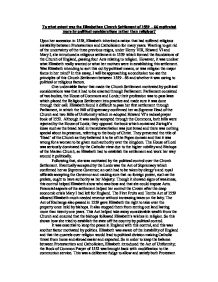 To what extent was the Elizabethan Church Settlement of 1559 - 66 motivated more by political considerations rather than religious?

To what extent was the Elizabethan Church Settlement of 1559 - 66 motivated more by political considerations rather than religious? Upon her accession in 1558, Elizabeth inherited a nation that had suffered religious instability between Protestantism and Catholicism for many years. Wanting to get rid of the uncertainty of the three previous reigns, under Henry VIII, Edward VI and Mary I, she introduced a religious settlement in 1559 which formed the foundations of the Church of England, passing four Acts relating to religion. However, it was unclear what Elizabeth really wanted or what her motives were in establishing this settlement. Was Elizabeth intending to sort this out by political means, or was religion the major focus in her mind? In this essay, I will be approaching a conclusion too see the principles of this Church Settlement between 1559 - 66 and whether it was owing to political or religious factors. One undeniable factor that made the Church Settlement motivated by political considerations was that it had to be enacted through Parliament. Parliament consisted of two bodies, the House of Commons and Lords; their profession was to pass laws which placed the Religious Settlement into practice and made sure it was done through their call. Elizabeth found it difficult to pass her first settlement through Parliament, in which the Bill of Supremacy confirmed her as Supreme Head of the Church and two Bills of Uniformity which re-adopted Edward VI's radical prayer book of 1552. ...read more.

This was a compromise which would clearly aim towards Protestantism, but in order for Elizabeth to keep the peace at home and abroad she would have to make it seem as though it was Catholic and then slowly draw them into Protestantism. However, there is the argument that the Church Settlement was motivated by religion as well. Perhaps the most important consideration to Elizabeth in creating the settlement was that it conformed to her personal, religious views. Sources shows that in March 1559, Elizabeth told her Spanish Ambassador, Feria that she would 'resolve to restore religion as her father had left it'. But this proves to intervene with Elizabeth's upbringing as a Protestant and being governed and tutored by Protestants such as Roger Ascham. Contemporaries such as John Foxe believed that she pushed through a more Protestant religious settlement against the opposition of the Catholics; she allegedly stormed out of her chapel following Bishop Oglethorpe's Elevation of the Host on Christmas Day 1558, preferred to have the Bible translated into English and was regarded as an example of piety during Edward VI's reign rather than a heretic as was the case during Mary's reign. The Protestant nature of this settlement on the other hand proved to be suspect still as Elizabeth kept a crosses and candles in her chapel which was allowed due to the Act of Uniformity, retained services of Thomas Tallis as a chapel organist, disliked long sermons and especially clerical marriage which was a Protestant belief. ...read more.

But the doctrine of the Church was aimed to a more Protestant direction, especially by the end of 1563. Stephen Alford argues that Elizabeth could have made life easier on her accession if she continued the Catholic policies of Mary I. There would be no fear of Catholic threat from ally Spain and the Pope. Also, the majority of England was Catholic at the time in 1558 so it would have pleased them and made Elizabeth more welcome to the throne. But due to her Protestant beliefs, as already mentioned, she chose to go through this path and slowly enforce it on her people with some Catholic traditions, which proved to be fudge. Revisionists such as Christopher Haigh argue altogether that the Church Settlement made no coherent sense and had very little settled anything. I agree with this statement as the settlements purpose supposedly was to establish religious beliefs, but this was overcome with Elizabeth's own political needs at the forefront of her mind. The Act of Supremacy and Uniformity didn't create a balance or unity of religious beliefs, as Elizabeth may have though it would; instead it created disorder and confusion. The Thirty Nine Articles then orders Protestant beliefs, so the purpose of the previous Acts was of no use. Perhaps Elizabeth secretly intended to follow the flow and slowly enforce Protestantism when she was more secure on the throne. Or maybe this was pushed upon her due to the difficult circumstances. The answers are anonymous and I believe that politics is the major factor in establishing the Church Settlement. (1871 words) ...read more.