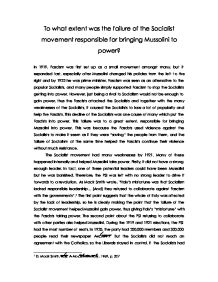 To what extent was the failure of the Socialist movement responsible for bringing Mussolini to power?

To what extent was the failure of the Socialist movement responsible for bringing Mussolini to power? In 1919, Fascism was first set up as a small movement amongst many, but it expanded fast, especially after Mussolini changed his policies from the left to the right and by 1922 he was prime minister. Fascism was seen as an alternative to the popular Socialists, and many people simply supported Fascism to stop the Socialists getting into power. However, just being a rival to Socialism would not be enough to gain power, thus the Fascists attacked the Socialists and together with the many weaknesses of the Socialists, it caused the Socialists to lose a lot of popularity and help the Fascists. This decline of the Socialists was one cause of many which put the Fascists into power. This failure was to a great extent, responsible for bringing Mussolini into power. This was because the Fascists used violence against the Socialists to make it seem as if they were "saving" the people from them, and the failure of Socialism at the same time helped the Fascists continue their violence without much resistance. The Socialist movement had many weaknesses by 1921. Many of these happened internally and helped Mussolini take power. Firstly, it did not have a strong enough leader. In fact, one of these potential leaders could have been Mussolini but he was banished. ...read more.

This meant that almost everyone was unhappy with the issue of Fiume. This led to people wanting a change because they felt the Liberal government could not lead the country properly. These concerns were arguably justified, especially after considering how it dealt with the growth of Fascism. It did nothing to repel the Fascists but instead on many occasions helped them. For example, many agents of the government co-operated with the Fascists. Some of the generals in the army were also involved with the Fascist squads. The police in the cities did not fight them either. Giolitti made the situation even worse by including Fascists in his government, which made the Fascists stronger and weaken the opposition against them. These factors meant that the Liberal government was failing from within, which could only improve the chances of the Fascists gaining power. It was not just the failings of the Liberal regime which made people want change. The effects of the First World War were still prevalent. The war caused a "distorted economy".4 This was because of inflation, caused by the government printing notes. This was not followed by wage rises, so strikes were more popular, which meant that people wanted a change in government. This increased unemployment which affected the workers and many of the middle classes lost their savings. The petty bourgeoisie and peasants were unhappy at how they hadn't been rewarded for taking part in the war. ...read more.

However, the Fascists quickly stopped the strike in a day by using violence and then justifying it. This strike failed at a time when Socialism had already failed, but by doing this they gave Mussolini extra cards to play with and continue the Fascist movement. Ultimately, there is no doubt that the failure of the Socialists to a great extent helped Mussolini to get power. The PSI had 2 major opportunities to gain power in 1919 and to a lesser extent in 1921 but were not prepared to do so simply because they were against the Liberals. This, one of many of the Socialist's failures, helped the Fascists to continue their violence against the Socialists and led to Mussolini gaining power who was ironically their bitter enemy. The Socialists also helped by being unorganised, shown by the way they declined so quickly and were disunited, such as between Maximalists and Minimalists. No doubt other reasons also helped Mussolini, such as a weak king, his own strengths and the need for change amongst the country. But the decline of Socialism was the main factor, and without it Mussolini would not have gained power so quickly. 1 D. Mack Smith, Italy: A Modern history, 1969, p. 327 2 Major northern newspaper, Corriere della Sera, September 1920 3 A. Cassels, Fascist Italy, 1969, pp. 24-25 4 M. Blinkhorn, Mussolini and Fascist Italy, 1984, p. 9 5 P. Morgan, Italian Fascism 1919-45, 1995, p. 7 6 A. Cassels, Fascist Italy, 1969, p. 24-25 ?? ?? ?? ?? ...read more.