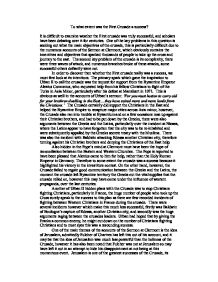 To what extent was the first crusade a success

To what extent was the First Crusade a success? It is difficult to examine weather the First crusade was truly successful, and scholars have been debating over it for centuries. One of the key problems in this question is seeking out what the main objectives of the crusade, this is particularly difficult due to the numerous accounts of the Sermon at Clermont, which obviously contains the incentives and objectives that sparked thousands of people to take up the cross and journey to the east. The second key problem of the crusade is its complexity, there were three waves of attack, and numerous branches broke of these attacks, some successful others defiantly were not. In order to discover then whether the First crusade really was a success, we must first look at its intentions. The primary spark which gave the inspiration to Urban II to call the crusade was the request for support from the Byzantine Emperor Alexius Comnenus, who requested help from his fellow Christians to fight of the Turks in Asia Minor, particularly after his defeat at Manzikert in 1071. This is obvious as well in the accounts of Urban's sermon: 'For you must hasten to carry aid for your brethren dwelling in the East....they have seized more and more lands from the Christians.' The Crusade certainly did support the Christians in the East and helped the Byzantine Empire to recapture major cities across Asia minor, however, the Crusade also ran into trouble at Byzantium and ...read more.

Fulcher was not at Jerusalem so may have left it out in an attempt to hide his disappointment at not being at this momentous event. Jerusalem is one of the greatest successes of the Crusade, its timely capture and the holiness before the assault surely speak for themselves proving that the capture of Jerusalem was a resounding success for the crusade. Jerusalem stood for everything the Crusade had shown, piety, bravery, brutality, quarrelling, and luck. Urban cannot have hoped for anything more, despite quarrels between Raymond of Toulouse and the other crusade leaders, when it came to it, all fought side by side under one banner against a common enemy and won. They had been very fortunate in the timely arrival of a fleet of Ships at Jaffa carrying the equipment needed to build siege equipment, and to the crusaders it must have seemed like God was on their side. They managed to capture the city before the Fatamid army arrived, and had given a great display of their piety by marching around the walls, without armour, with the risk that the Muslims would sally out and attack them unarmed. The crusade brutally killed all the inhabitants and restored Jerusalem to its so called rightful owner. The First wave of the Crusade however can hardly be called a success. 60,000 peasants set of to Byzantium from France in the early summer of 1096. ...read more.

the second wave, however they we all defeated thus indicating to historians that there must have been a further reason for their lose. . In conclusion, it is still difficult to say to what extent the First Crusade was successful, In comparison to the later crusades; it was by far the most successful, in the sense that it achieved all of its military objective, although some of them were prolonged. In doing this it also won several difficult battles, particularly outside Antioch and at Dorylaeum, where victory was achieved against the odds. The Crusade was also successful in supporting the Byzantines and helping them regains control of there key areas of Asia minor, and stopping the 'persecution' of Christians in the East. It showed the power of the Papacy, not only within Christendom, but throughout the known world, and united the Christians under a common banner against a common enemy. On the other hand the crusade was not so successful; it failed to reconcile the western and eastern Churches, and in some cases decreased relations, the crusade showed up the bad leadership of the western leaders through their inability to cooperate with each other and make quick correct decisions, the way the armies were set out at Jerusalem is the result of this embarrassing lack of command. The First and Third waves of the Crusade were complete failures, and the huge loss of men, women, and children during the crusade, make the success of the crusade very questionable. ...read more.