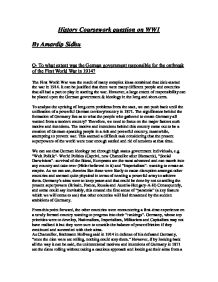 To what extent was the German government responsible for the outbreak of the First World War in 1914?

History Coursework question on WW1 By Amardip Sidhu Q- To what extent was the German government responsible for the outbreak of the First World War in 1914? The First World War was the result of many complex ideas combined that kick-started the war in 1914. It can be justified that there were many different people and countries that all had a part to play in starting the war. However, a large extent of responsibility can be placed upon the German government & ideology in the long and short-term. To analyse the uprising of long-term problems from the start, we can push back until the unification of a powerful German territory/country in 1871. The significance behind the formation of Germany lies as to what the people who gathered to create Germany all wanted from a modern country? Therefore, we need to focus on the major factors such motive and intentions. The motive and intentions behind this country came out to be a creation of German-speaking people in a rich and powerful country, meanwhile, attempting to prevent war. This seemed a difficult task considering that the present superpowers of the world were near enough settled and rid of tensions at that time. We can see that German ideology ran through high status government individuals, e.g. "Welt Politik"- World Politics (Caprivi, new Chancellor after Bismarck), "Social Darwinism"- survival of the fittest, Europeans are the most advanced and can march into any country and take over (Hitler believed in it) and "Imperialism"- wanting to create an empire. As we can see, theories like these were likely to cause disruption amongst other countries and seemed quite physical in terms of needing a powerful army to achieve them. ...read more.

Germany's immediate response follows with the Triple Alliance in 1882, an agreement which we can comprehend one step earlier that it may strengthen German security and increase France's isolation. This exactly, was intended and once again an alliance was formed involving Italy with A-H and Germany. This shows Germany was slipping away from the motive of European peace, which may have not been deliberate. However, they started to draw in countries to what could have been the actual motive of needing power & expansion. They certainly were provided with security because they had a strong feeling that France and Russia would not attack alone so in the event of a French attack the Triple Alliance would bring support. From these alliances we can see that Germany's responsibilities towards war were starting to show on the outside by focusing more on isolating France and just really thinking about themselves rather than before, when they may have caused unintentional mistakes. Later on however, giving Germany the benefit of the doubt was starting to wear away and they were trying to secure themselves only. Consequently, Germany was increasing their role, especially after securing and later enabling Germany to indulge in the luxury of colonial ventures. Effects of paranoia could be increasing to the next level as the German government increased towards extremely high achievements. As tensions grew between the Great Powers, Germany's high influence on tensions was seen as conspicuous. With the following tensions over the Arms race and Naval race, Germany found themselves creating individual tensions with individual countries. Once again this was not an accident in creating massive competition, however, it was a "natural expression" of Germany's economic power and growing overseas trade. ...read more.

At this stage it seemed A-H took some blame by combining with the idea from the German government to send an ultimatum to A-H consisting of impossible circumstances. We can understand Serbia's actions slightly because they wanted their rights and it will only be a matter of time until they (Black Hand- a Serbian terrorist group) undertook violence. At this stage the countries were running in; A-H undoubtedly declared war on Serbia; Russia's mobilisation was the best news for Germany so that they could get involved due to the Blank cheque; at the same time was their chance to use their Schlieffen plan against France. However, they thankfully made a mistake by marching through Belgium, which Britain had to protect due to an old agreement. By analysing it could be said that Germany was trying to do exactly what the other countries ad done to become superpowers, however, there would be a "natural" sense of paranoia where Germany would reach a level where they would start to threaten the powers. In the beginning it was primarily the misunderstanding of events passed that caused the insecurity/paranoia of countries to misunderstand situations. There was the participation of A-H with Germany's alliances giving them a powerful ally. In addition, they may have brought the trigger upon themselves by not handling disputes with Serbia properly. Seeing as short-term causes are so vital in acting like triggers, the foundations still lie in the long-term causes. Although Germany may not have played a big part in the trigger, they are the ones who have pushed and maybe gathered countries towards the war. This is the case especially after Germany created physical issues i.e. Arms & Naval race. ...read more.