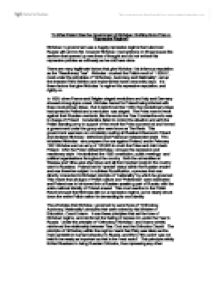 To What Extent Was the Government of Nicholas I Nothing More Than A Repressive Regime?

To What Extent Was the Government of Nicholas I Nothing More Than A Repressive Regime? Nicholas I's government was a hugely repressive regime that ruled over Russia with an iron fist, however Nicholas I had opinions on things issues like serfdom that opened up new lines of thought and did not enforce his repressive policies as ruthlessly as he cold have done. There are many legitimate factors that give Nicholas I his infamous reputation as the "Reactionary Tsar". Nicholas I crushed the Polish revolt of 1830-31, ruled under the principles of "Orthodoxy, Autocracy and Nationality", set up the dreaded Third Section and implemented harsh censorship laws. It is these factors that give Nicholas I's regime this repressive reputation, and rightly so. In 1830, when France and Belgian staged revolutions and Italy and Germany showed strong signs unrest, Nicholas feared for Poland being infected with these revolutionary ideas. But in late November 1830, the revolutionary ideas had spread in Poland and a revolution was staged. The Poles rose in revolt against their Russian overlords, like the would-be Tsar Constantine who was in charge of Poland. Constantine failed to control the situation and with the Polish standing army in support of the revolt the Poles succeeded and formed a government under the group who were know as The Reds. This government was keen on completely ousting all Russian influence in Poland and declared Nicholas I dethroned and Poland an independent state. ...read more.

The Third Section rooted out any perceived "evil" in Russia, discovering plans for revolutions by intellectual groups and having them sentenced to death or hard labour in Siberia. This was the case with the Petrachevsky Circle, which drew up the programme of equality before the law, freedom of the press, abolition of censorship and a democratic republic. The Third Section discovered the Petrachevsky Circle in May 1849 and rounded up the leaders sentencing 15 of them to death, only for this sentence to later be turned into a hard labour sentence. This presence of the Third Section in Russia, made everyone feel more repressed, you had to watch what you said and how you felt, in fear of the infamous secret police coming after you. Under Nicholas I especially, the Third Section kept thousands of Russian citizens under surveillance. The Third Section was just another ominous reminder of how repressed Russia really was in under Nicholas I, and with the strict principles of Orthodoxy, Autocracy and Nationality looking to be upheld, people lived in fear of accidentally going against one of these principles in the presence of a Third Section officer. Nicholas I also introduced stringent censorship laws. Cookery book's were not allowed to mention "free air" because of its revolutionary connotations and the Third Section and Ministry of Education, who were responsible for censorship, frowned upon any discussion of social issues in the press or books. ...read more.

This lack of desire to enforce nationality throughout Russia shows us that Nicholas I the first was not as repressive as the nature of the Nationality suggests. It seemed to be little known that Nicholas preferred the idea of a well-ordered society than an entirely patriotic one. Finally, Nicholas' censorship rules were not as harsh as it appeared. Alex I's censorship laws were much more encompassing and limited the pursuits of the intelligentsia. Nicholas I's censorship laws did not clamp down of the intelligentsia like Alex I's did, but merely acted to prevent the free spread of ideas outside the narrow confines of the intelligentsia's group. The censorship laws looked kindly upon small intelligentsia publications, which was subject to bitter debates within the government of Nicholas I. In conclusion, Nicholas I did appear at face value to be very repressive. With the three principles of Orthodoxy, Nationality and Autocracy, the Third Section, censorship laws and the ruthless crushing of the Polish revolution, it appears that there can be no discussion on whether he was repressive or not. But when you look at the issues more closely, it becomes clear that Nicholas I only enforced things like Nationality on revolutionary countries who threatened the decrease of Russia's empire and that censorship was not as stringent as perceived. Nicholas I first also successfully did a lot for the serfs, leading the way for Alex II to abolish it. There is no denying that Nicholas I's government had a very repressive nature, but it is clear that Nicholas I did care hugely about the welfare of his country. ...read more.