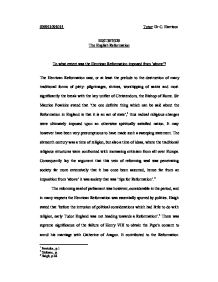 To what extent was the Henrican Reformation imposed from 'above'?

009911091015 Tutor: Dr C. Harrison HIST307/320 The English Reformation To what extent was the Henrican Reformation imposed from 'above'? The Henrican Reformation saw, or at least the prelude to the destruction of many traditional forms of piety: pilgrimages, shrines, worshipping of saints and most significantly the break with the key unifier of Christendom, the Bishop of Rome. Sir Maurice Powicke stated that 'the one definite thing which can be said about the Reformation in England is that it is an act of state',1 thus radical religious changes were ultimately imposed upon an otherwise spiritually satisfied nation. It may however have been very presumptuous to have made such a sweeping statement. The sixteenth century was a time of religion, but also a time of ideas, where the traditional religious structures were confronted with increasing criticism from all over Europe. Consequently lay the argument that this vein of reforming zeal was penetrating society far more extensively that it has once been assumed, hence far from an imposition from 'above' it was society that was 'ripe for Reformation'.2 The reforming zeal of parliament was however, considerable in the period, and in many respects the Henrican Reformation was essentially spurred by politics. Haigh stated that 'before the intrusion of political considerations which had little to do with religion, early Tudor England was not heading towards ...read more.

They were, in fact centres of pride, and it can being seen all over the country at this time local people putting into their own pockets to upkeep places that were soon to become under attack. They are continuous examples of people's attachment to the old system, rather than a resistance. If one looks at the sixteenth century wills there is evidence that traditional exercises were still very much in the forefront of people's hearts and minds. Although the wills are not indicative of a life devoted to traditional piety, it does mean that when it came to their last hour's people still thought it worth believing in Heaven, Hell and Purgatory. One of the most interesting examples in that of Robert Burgoyne11, a clerk of the Court of Augmentations. This was an agency concerned with the possessions from the dissolved monasteries. His will, in 1545 actually gave as bequests the vestments that he had taken form the monasteries! Yet what is surprising is that fact that here is a man who should have realised that placing money into the old system was relatively futile, yet this did not deter him. Was there in fact part of him that believed the old order would continue, or did he actually, regardless of the current vein still believed in the old system? ...read more.

The Common Prayer Book was issued, images dismantled, church altars replaced with bare tables. This was the time when the power of the state really gave the Protestant reformation the apparatus it needed to push for reform. It is clear that even within the reign of Henry much of the changes had been 'imposed' on the nation, albeit embraced by people with such Protestant sympathies. The Henrican Reformation had achieved a political reformation that had paved the way for a religious reformation, yet the power of the state had ensured that there was little resistance to change. The practice of people's faith, however kept much of its normality, especially as the impact of government decisions was modified by local and familar officials. Few of the laity were willing to have the responsibility of using their individual conscience, despite the influence of Lollardy, and the ideas that were circulating the continent, smuggled into England by merchants which nonetheless did find receptive breeding grounds. For many of the localities, however, as Haigh has suggested they continued pledging their faith in God22 and, it might be worth adding, following the lead of their monarch. When Michael Sherbrook as his father why he helped despoil the local abbey of Roche in Yorkshire, h simply replied 'For I did see all would away; and there I did as other did'. ...read more.