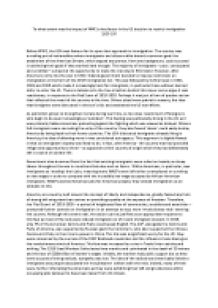 To what extent was the impact of WW1 a key factor in the US decision to restrict immigration 1917-29?

﻿To what extent was the impact of WW1 a key factor in the US decision to restrict immigration 1917-29? Before WW1, the USA was famous for its open door approach to immigration. The country was a melting pot of nationalities where immigrants and citizens alike shared a common goal: the attainment of the American Dream, which argued any person, from any background, could succeed in achieving their goals if they worked hard enough. The majority of immigrants ? poor, uneducated and unskilled ? jumped at the opportunity to make the crossing to Ellis Island. However, after America?s entry into the war in 1917, federal government decided to impose restrictions on immigration in the form of the 1917 Immigration Act. This was followed by further laws in 1921, 1924 and 1929 which made it increasingly hard for immigrants, in particular those without desired skills, to enter the US. There is debate as to the true intention behind this move: some argue it was reactionary, in response to the Red Scare of 1919-1920. ...read more.

America, as a country built around the concept of liberty and independence, greatly feared any form of strong left wing view that centres on providing equality at the expense of freedom. Therefore, the ?Red Scare? of 1919-1920 ? a period of heightened fear of communists, socialists and anarchists ? prompted further controls on immigration in an attempt to stop more ?revolutionary reds? entering the country. Although this seems rash, the action can be justified as an appropriate response to this fear as most of the reds were indeed immigrants or of recent immigrant descent. In 1919, only 7% of the American Communist Party could speak English. The ACP, alongside the Communist Party of America, was supported by Russian giant the Comintern, who later supported the Chinese Communist Party in their rise to power in China. This link was a significant worry for the US: they were concerned by the success of the 1917 Bolshevik revolution and the influence it was having on the revolutionary minds of America. ...read more.

introduced tighter controls on immigration. Although pre-existing racial tensions may have added pressure to moves to restrict immigration, they are unlikely to have been a significant primary cause because they had been present in America for so long: before 1917, attitudes to immigration were liberal despite the strains in society between immigrants. It would seem more legitimate to argue that tough circumstances, i.e. WW1, created a natural need for a scapegoat which, as they were a relatively powerless minority, was realised on the immigrants. Fear, poverty, loss of life and general turmoil combined to create resentment for any part of society which reminded WASPs of the outside world they were fighting. This was only exacerbated by the employment and housing race that appeared to be dominated by immigrants. Furthermore, fear of reds ? again a symbol of a threat from the outside world, namely Russia ? caused immigrants to be scapegoated in the name of the comforting notion of a proactive fight against the perceived danger. ...read more.