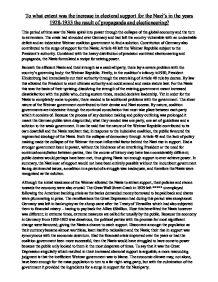 To what extent was the increase in electoral support for the Nazis in the years 1928-1933 the result of propaganda and electioneering?

To what extent was the increase in electoral support for the Nazi's in the years 1928-1933 the result of propaganda and electioneering? This period of time saw the Nazis spiral into power through the collapse of the global economy and the turn to extremism. The crisis had shrouded over Germany and had left the country vulnerable with an undesirable deficit and an indecisive Weimar coalition government to find a solution. Constitution of Germany also contributed to the surge of support for the Nazis; Article 48 left the Weimar Republic subject to the President's authority. Combined with the heavy distribution of precision contrived electioneering and propaganda, the Nazis formulated a recipe for seizing power. Beneath the efficient Nazis and their strength as a catch-all party, there lay a severe problem with the country's governing body: the Weimar Republic. Firstly, in the coalition's infancy in1930, President Hindenburg had immediately cut their authority through the exercising of Article 48 rule by decree. By law this allowed the President to exert ultimate authority and could amend and make statute law. For the Nazis this was the basis of their uprising; dissolving the strength of the existing government meant increased dissatisfaction with the public who, during austere times, needed decisive leadership. ...read more.

How this benefitted the Nazis however was different; in extreme times, extreme measures are called for usually by the public. Because the economy in Germany from 1929-1932 was disastrous, the political parties with the promise for most significant change were favoured; giving the Nazis a chance to catch support. Discontent amongst the population as their currency became almost worthless, leant itself to radicalism and the Nazis; their rise in support was synonymous with the economic downturn. Had the financial crisis improved over the years or had the coalition government been more successful, then the Nazis would have struggled to have come to power because the public only looked to them in the most desperate of times. To say that it was the Great Depression singularly which resulted in their increased electoral support is arguable; a more resounding judgment is that the inefficient Weimar government was to blame. The economic climate may, not alone, have been enough for the mass population to turn to a far right-wing party, but with the culmination of the government it provided the ingredients for a surge in support for the Nazi party. The internal structure and organisation of the Nazi party also had a telling effect on the attraction of voters, despite the external conditions. ...read more.

Secondly what also aided their success were the subjects of their propaganda. Knowing their ideology suited strata of society, Nazis targeted farmers, families, workers, women and many more groups with knowledge that they could promote policies for that area and attract their vote. Good examples of this were the posters aimed at farmers talking of rural support, and the cartoon of family, idealising them and outlining the benefits of a prosperous family. Both electioneering and propaganda undoubtedly helped the Nazi cause. Hitler himself was a successful tool in which people were attracted, as well as the volume of propaganda it was unsurprising that they eventually achieved power. Propaganda and electioneering certainly were successful in the Nazi rise in support during 1928-1933, but had it not been for the existing problems then they would not have been so effective. The global economy lead to severe discontent around Germany and left the nation in ruins; the government in office was not of high enough calibre to satisfy their needs and a solution was sought after. Nazi support ultimately sprouted from the weakness of the coalition; a stronger government could have rode roughshod and kept power, yet through the worsening of the crisis and the powerful weapon of propaganda, Hitler and the Nazis were able to gain control of Germany; one of the most infamous regimes in history. ...read more.