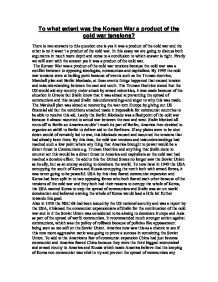 To what extent was the Korean War a product of the cold war tensions?

other because of the tensions of the cold war and they both had their reasons to occupy the whole of Korea, the USA wanted Korea to stop the spread of communism and Stalin was set on world domination and believed owning the whole of Korea would lead a little bit further towards this goal. Also in 1950 the NSC-68 had been issued by the US national security and was a report by the USA, it blamed the communist expansionism of Stalin for the continuation of the cold war and in it the Soviet Union was considered to be aiming to dominate Europe and Asia as part of the spread of world communism. It recommended much stronger action against communism, which was the policy of rollback because of policies like appeasement being seen as too soft on the Soviet Union. America now saw this as a chance to see if this new more aggressive tactic was going to prove a success in containing the Soviet Union. ...read more.