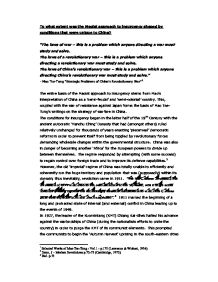 To what extent was the Maoist approach to insurgency shaped by conditions that were unique to China?

"In this report on the peasant movement in Hunan [Mao] argued that peasant dissatisfaction was the main potential force for revolution in China; if the new government in Wuhan supported the peasant movement the revolution could be victorious."5 Mao also stipulated that the peasant classes must first seize power and then be educated in Marxist thought, rather than vice versa. This established the bedrock of Mao's belief in a revolutionary-peasant guerrilla army. After the failure of the United Front (KMT nationalist forces, communists and other forces united in favour of national unity) in July 1927, the CCP almost collapsed. The failure of external influences on the CCP from organisations such as the communist international and the USSR resulted in subsequent CCP policies and ideology to take on a highly individualistic flavour (i.e. a Marxist party without many of the conventional Marxist-Leninist ideas, most notably the lack of emphasis on the urban proletariat) from the 1930's onwards. Urban insurrections had taken place in the late 1920's and early 1930's under the guidance of Moscow in cities such as Nanching, Hunan and Canton without any success and urban insurrection was 'put on the back burner', reserved only to 'support the rural soviets'.6 After the collapse of the Manchu Ching Dynasty, China was broken up into 'warlordships', a situation that was unique to China. ...read more.

If we only have Red guards of a local character but no regular Red Army, then we can only deal with the house-to-house militia, but not the regular White troops."8 The cultural influences on the Maoist approach to insurgency are very important in trying to understand the context in which it was formed. Due to the extremely rich cultural heritage of China that stretches back millennia, it would have been totally impossible and undesirable for Mao and his fellow communists to enact a complete 'break with the past'. "Mao himself, while he sought in that peculiar Westernizing ideology known as Marxism-Leninism the ideas and methods by which to re-shape his own society, also stressed the need to adapt and transform Marxism in the Chinese environment."9 The basis behind the Chinese traditional methods of political philosophy was the doctrine of 'Confucianism' 1 Selected Works of Mao Tse-Tung - Vol.1 - p.175 (Lawrence & Wishart, 1954) 2 Dunn, J - Modern Revolutions p.72-73 (Cambridge, 1972) 3 Ibid. p.73 4 Beckett, I.F.W. - Modern Insurgencies and Counter-Insurgencies - p.70-71 (Routledge, 2001) 5 Gray, J - Rebellions and Revolutions - p.250 (Oxford 1990) 6 Ibid. p. 256 7 Selected Works of Mao Tse-Tung Vol.1 p.64 (Lawrence & Wishart, 1954) 8 Ibid. p.66 9 Schram. S.R. - Mao Zedong: A Preliminary Reassessment - p.2 (St.Martins press 1983) ...read more.