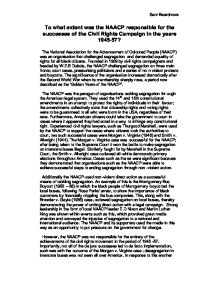 To what extent was the NAACP responsible for the successes of the Civil Rights Campaign in the years 1945-57? The National Association for the Advancement of Coloured People (NAACP) was an organisation that challenged segregation and demanded equality of rights for all black citizens. Founded in 1909 by civil rights campaigners and headed by W.E.B Dubois, the NAACP challenged segregation on three main fronts; court cases, pressurising politicians and a series of non violent protests and boycotts. The significance of the organisation increased dramatically after the Second World War when its membership sharply rose, a period now described as the 'Golden Years of the NAACP'. The NAACP was the paragon of organisations tackling segregation through the American legal system. They used the 14th and 15th constitutional amendments in an attempt to protect the rights of individuals in their favour; the amendments collectively state that citizenship rights and voting rights were to be guaranteed to all who were born in the USA, regardless of their race. ...read more.

Additionally the NAACP used non-violent direct action as a successful means of tackling segregation. An example of this is the Montgomery Bus Boycott (1955 - 56) in which the black people of Montgomery boycotted the local buses, following Rosa Parks' arrest, to show the importance of black customers by financially crippling the bus companies. This, along with the Browder v. Gayle (1956) case, outlawed segregation on local buses, thereby demonstrating the power of uniting direct action with a legal campaign. Strong leadership in the form of local NAACP leader E.D Nixon and Martin Luther King was shown within events such as this, which provoked great media attention and conveyed the injustice of segregation to a national and international audience. The NAACP and its supporters used the media in this way as an opportunity to put pressure on the government for change. ...read more.

In conclusion, having considered the inputs and achievements concerning the civil rights movement between the years 1945 - 1957, I believe that the NAACP was responsible for the successes of the civil rights movement to a large extent. It was the organisation that first opened the door for opportunities to successfully challenge segregation using the legal system and even managed to overturn previous unsuccessful cases, such as the Plessy v. Ferguson case of 1896. It served as an inspiration for other organisations, such as CORE and the later Southern Christian Leader Conference (SCLC), to protest segregation using new ways of non-violent, direct action. Furthermore the organisation itself, along with similar ones, had not yet perfected its methods by this point but would greatly contribute in seeing the new dawn of the civil rights movement beginning in the late 1950s. ?? ?? ?? ?? Sam Beardmore ...read more.