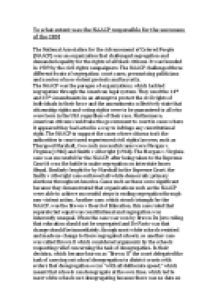 To what extent was the NAACP responsible for the successes of the Civil Rights Movement?

﻿To what extent was the NAACP responsible for the successes of the CRM The National Association for the Advancement of Colored People (NAACP) was an organization that challenged segregation and demanded equality for the rights of all black citizens. It was founded in 1909 by the civil rights campaigners. The NAACP challenged three different fronts of segregation; court cases, pressurizing politicians and a series of non-violent protests and boycotts. The NAACP was the paragon of organizations, which tackled segregation through the American legal system. They used the 14th and 15th Amendments in an attempt to protect the civil rights of individuals in their favor and the amendments collectively state that citizenship rights and voting rights were to be guaranteed to all who were born in the USA regardless of their race. ...read more.

Virginia (1946) and Smith v Allwright (1944). The Morgan v. Virginia case was successful for the NAACP; after being taken to the Supreme Court it won the battle to make segregation on interstate buses illegal. Similarly fought for by Marshall in the Supreme Court, the Smith v Allwright case outlawed all-white democratic primary elections throughout America. Cases such as these were significant because they demonstrated that organizations such as the NAACP were able to achieve successful steps to ending segregation through non-violent action. Another case, which struck triumph for the NAACP, was the Brown v Board of Education, this case ruled that separate but equal was constitutional and segregation was inherently unequal. ...read more.

Additionally the NAACP used non-violent direct action as a successful means of tackling segregation. An example of this is the Montgomery Bus Boycott 1955-56 in which the black people of Montgomery boycotted the local buses, following Rosa Parks' arrest, to show the importance of black customers by financially crippling the bus companies. This, along with the Browder v. Gayle case, outlawed segregation on local buses, thereby demonstrating the power of uniting direct action with a legal campaign. The NAACP was a huge success for the Civil Rights Movement and without it there would not have been the same great achievements and without it there might never of been the changes that were made. ...read more.