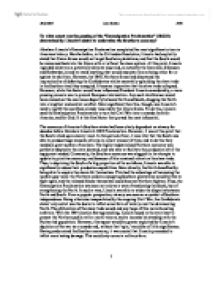 To what extent was the passing of the &quot;Emancipation Proclamation&quot; (1862/3) determined by Lincoln's desire to undermine the Southern economy?

To what extent was the passing of the "Emancipation Proclamation" (1862/3) determined by Lincoln's desire to undermine the Southern economy? Abraham Lincoln's Emancipation Proclamation completed the most significant u-turn in American history. Months before, in the Crittendon Resolution, Lincoln had explicitly stated that Union forces would not target Southern plantations, and that the South would be welcomed back into the Union with or without the slave system. At this point, Lincoln regarded slavery as a potentially divisive issue and, as noted by the historians Johansson and Hofstatder, aimed to avoid anything that would associate him as being either for or against its abolition. However, by 1863, Northern forces had discovered the impracticality of defeating the Confederates whilst essentially upholding the slave trade in the Southern land they occupied. It became imperative that the slave trade collapsed. However, while this factor would have influenced President Lincoln considerably, a more pressing concern was to prevent European intervention. Any such interference would have evened out the enormous disparity between North and South, dragging the North into a lengthier and costlier conflict. More significant than this, though, was Lincoln's need to justify the sacrifices already incurred by the Union forces. To do this, Lincoln used the Emancipation Proclamation to turn the Civil War into a crusade: both for America, and for God. It is this final factor that proved the most influential. ...read more.

The war had crippled the Northern economy and slowed the growth of its industry, creating an uncertain atmosphere amongst investors and consumers alike. Moreover, there was not a family untouched by the horrors of War. At the Battle of Gettysburg, for example, more Americans died in five days than in twenty-five years in Vietnam. After 1862, there was for the first time a reluctance to fight; to weary Northerners, the war seemed devoid of meaning, and thus the casualties appeared pointless. For Lincoln, this switch in public opinion was highly significant. With an election approaching in 1864, it was essential that he was able to present the electorate with a return for their losses. He therefore switched the aim of the War from Unionism to abolitionism: if he could eradicate slavery before the election, Lincoln could more easily defend the war effort. At the same time, it was essential that Lincoln instilled in the North a motivation that would unite them towards a single end and give them a sense of purpose. At the Battle of Antiteam, a bloody Northern victory during the autumn of 1862, he therefore declared that any states opposing the Union by January of the next year would have their slaves actively freed. In order to justify this switch, Lincoln portrayed the Civil War as a crusade against slavery, sighting both American and Christian causes. ...read more.

This factor is therefore more important than the undermining of the Southern economy. However, it must be considered secondary to the ideological factor, as Britain and France may not have invaded even without Lincoln's Declaration. Even so, the opportunity of eradicating any possibility of intervention would certainly been a considerable issue in Lincoln's decision. It is clear that the prospect of undermining the Confederate economy had an important impact on Lincoln's decision to issue the Emancipation Proclamation. Any weakening of that economy would aid the Northern war effort by slowing the Southern production rate and decreasing their work force. However, a more important concern was that of foreign intervention: in making the War about slavery, Lincoln was able to deter the British and French governments from invading on the Confederate side. More important than this, though, was the appearance of the War to the Northern electorate. In declaring that the War was God's "punishment" for America's sin of slavery, and that it undermined the forefathers' ambitions, Lincoln encouraged both Puritan and Nationalist Northerners to support the Northern cause. This factor, impacting as it did on the 1864 election, can be seen to be the one that most influenced Lincoln. Through this cosmetic alteration of the war effort, Lincoln's aims transcended his original desire for Unionism. After the Proclamation, Lincoln's aspirations developed from this simple pledge to an ambition of winning the war, the election- and the slaves' freedom. It turned out to be his definitive victory. 28/2/2005 Luke Bullen NPS 1 ...read more.