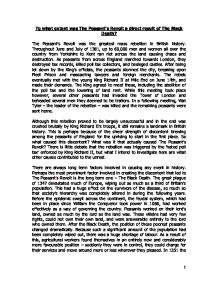 To what extent was The Peasant's Revolt a direct result of The Black Death?

To what extent was The Peasant's Revolt a direct result of The Black Death? The Peasant's Revolt was the greatest mass rebellion in British history. Throughout June and July of 1381, up to 60,000 men and women all over the country from Yorkshire to Kent ran riot across the land causing chaos and destruction. As peasants from across England marched towards London, they destroyed tax records, killed poll tax collectors, and besieged castles. After being let down by the King's officials, the peasants stormed the city, breaking open Fleet Prison and massacring lawyers and foreign merchants. The rebels eventually met with the young King Richard II at Mile End on June 14th, and made their demands. The King agreed to meet these, including the abolition of the poll tax and the lowering of land rent. While this meeting took place however, several other peasants had invaded the Tower of London and beheaded several men they deemed to be traitors. In a following meeting, Wat Tyler - the leader of the rebellion - was killed and the remaining peasants were sent home. Although this rebellion proved to be largely unsuccessful and in the end was crushed brutally by King Richard II's troops, it still remains a landmark in British history. ...read more.

the legacy of the terrible disease, and all factors in contributing to the Peasant's Revolt, which was to follow less than half a century after the outbreak of the plague. So it seems to be clearly evident that the Black Death caused the Peasant's revolt. Had the changes in society brought about by the plague not occurred, the yeomen would not have had the ability, or indeed the reason to rise up in such a way. However, this argument does not take into account the other factors that undoubtedly contributed to the discontent of the peasantry, leading them to rebel in such a way. One such factor is the bad conduct of the hundred years war by the English. The English involvement in the war had left the treasury empty, and the nobility grew tired of paying for the conflict. As a solution to this, John of Gaunt imposed a new tax as of 1377. This poll tax as designed to cover the increasing cost of the war, and to be paid by everybody - not only landowners, but for the first time, peasants as well. ...read more.

John Ball, a revolutionary priest at the time, is famous for preaching: "When Adam delved and Eve span, who was then the gentleman?" 1 He has been identified as one of the leaders of the Peasant's Revolt, and rebel priests such as this man made the peasant's desire to rebel even stronger. Ball was deemed so dangerous by John of Gaunt that he was arrested and imprisoned, but freed during the storming of London. Although not deemed the most important factor in contributing to the Peasant's Revolt, the hatred of the church by the peasants, and indeed some of it's own clergymen is undoubtedly significant in tipping the scales towards rebellion. All these factors, along with the inexperience of King Richard II, who was only fourteen years of age at the time of the uprising and certainly taken advantage of by John of Gaunt and the barons who despised the peasantry, contribute to the events which later became known as the Peasant's Revolt. It seems that one cannot claim that the Black Death was directly responsible for these events; even though it is of great importance, there are simply too many other factors to the contrary involved to justify this argument. 1 Tiscali online encyclopedia ?? ?? ?? ?? 1 ...read more.