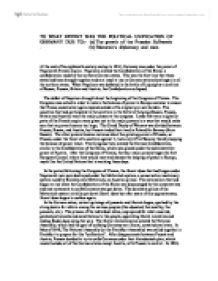 To what extent was the political unification of Germany due to:- (a) The growth of the Prussian Zollverein . (b) Bismarck's diplomacy and wars

TO WHAT EXTENT WAS THE POLITICAL UNIFICATION OF GERMANY DUE TO:- (a) The growth of the Prussian Zollverein . (b) Bismarck's diplomacy and wars At the end of the eighteenth century and up to 1814, Germany was under the power of Napoleon's French empire. Napoleon created the Confederation of the Rhine, a confederation made by the northern German states. This was the first time that these states had been brought together and as a result a rise in German nationalism began in all the northern states. When Napoleon was defeated in the battle of Leipzig by a coalition of Russia, Prussia, Britain and Austria, the Confederation collapsed. The defeat of Napoleon brought about the beginning of the Congress of Vienna. The Congress was called in order to restore the balance of power in Europe and also to ensure that France could never again expand outside of its original pre-war borders. The countries that had participated in the coalition in the battle of Leipzig (Russia, Prussia, Britain and Austria) were the major players at the congress. Lands that were originally parts of the French empire were given out to the major powers in a way that would make sure that no power became too large. The Grand Duchy of Warsaw was divided between Prussia, Russia, and Austria, but Prussia traded their land in Poland for Saxony (from Russia). The other powers became nervous about the growing power of Prussia, so Prussia, under the threat of a coalition against it, took only 2/5 of Saxony thereby keeping the balance of power intact. The Congress then created the German Confederation, similar to the Confederation of the Rhine, which was placed under the administrative power of Austria. ...read more.

Europe had just recently dealt with Napoleon's France and would not allow something like that to happen again. So Bismarck had to provoke the others to attack him. In 1863, Denmark tried to take away the autocracy of the two northernmost German states, Schleswig and Holstein. Bismarck announced that this was completely unacceptable to the German Confederation, and together Prussia and Austria went to war with Denmark. Secretly though, it gave Bismarck his chance to achieve victory over Denmark while working along with Austria. During this time and against the Frankfurt Assembly's wishes, Bismarck increased the size of his army significantly, hoping to quickly be victorious in the war. He hoped that a victory would justify his defiant domestic policy and give him the upper hand on his enemies, the liberals. As he had hoped, Bismarck's superior army along with Austria defeated Denmark, and the two states were split between them. Prussia took Schleswig, and Austria took Holstein. Though Bismarck achieved the victory he wanted, the liberals continued to be angry with him and continually tried to defy him. In 1866, Bismarck ordered his troops to advance to the Austrian state of Holstein, and attempted to provoke Austria into declaring war. He made sure that Austria was diplomatically isolated and would be able to receive no help from Russia, France, Britain, or Italy. To finally bring Austria against him, Bismarck sent a message to Italy that was intended to be "intercepted" by Austria. The message stated that Prussia wished Italy to help them in a defensive war against Austria. Bismarck then initiated the most clever part of his plan. ...read more.

It caused them to want another war instead of a long lasting peace. As planned, the Franco-Prussian war gave Bismarck the support he needed to unify Germany. After the war, he won the consent of the German princes to unite Germany (excluding Austria) under the Prussian king as German Emperor, though several princes still retained limited autonomy. On January 18, 1871, in Versailles, the king proclaimed the German Empire. William I became Kaiser and Otto von Bismarck became chancellor. The new Germany kept roughly the same constitution as the North German Confederation had, but a few things were changed. A national Parliament, the Reichstag, was elected by the people. It had budgetary rights, but it could not overthrow the government. The federal council, Bundesrat, was the conservative's check on the influence of the Reichstag. The Bundesrat consisted of princes. The various German armies remained separate for each German state, but they had to follow the common Prussian command. So, basically, Bismarck had succeeded in making Prussia in control of all decisions. Not only were all of the armies loyal to Prussia, but the Bundesrat, headed by Prussian princes, made sure that the Reichstag never went against the will of Prussia. The Reichstag couldn't do much anyway, because all decisions of the Reichstag had to be approved by the Bundesrat. The unification caused some important changes in the rest of Europe. The Russians assumed a hostile attitude towards the new unification, and it was feared that if Germany became powerful, they might cut off Russia from the rest of Europe. France was hostile to the Germans in the first place due to the treaty that followed the Franco-Prussian war. The general agreement around Europe was that the new unified Germany would throw off the European balance of power. ...read more.