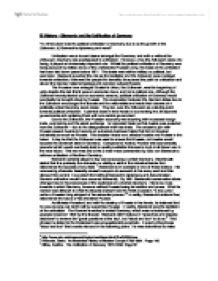 &quot;To what extent was the political unification of Germany due to a) the growth of the Zollverein, b) Bismarck's diplomacy and wars?&quot;

What he wanted was different to what the liberals wanted from the 1848 revolution; "a free union under a Prussian king stripped of his autocratic powers."[2][2] In reality, Bismarck's actions then, determined the future of his cherished Prussia. As Minister-President, and with the destiny of Prussia in his hands, he believed that he was carrying out God's will by expanding Prussia. In reality, Bismarck was the facilitator of the unification. The German's wanted a united Germany, which was not achieved by peaceful means in 1848 by the liberals. Bismarck didn't believe in "speeches and majority decisions" to answer the "great questions of the day", but "blood and iron" to do so.[3][3] This phrase he stated to the Parliament was unquestionably prophetic. It was by this phrase "blood and iron" that events mirrored in the following years. He was determined to make Prussia stronger politically, economically and militarily than any possible enemy. This strength acquired by The Zollverein, reorganising the Prussian army, driving liberals from their official position, and collecting taxes to fund the army forms would achieve Bismarck's dream of a united Germany under Prussian control. ...read more.

This Franco-Prussian War is a clear example of Bismarck's diplomatic brilliance; He had prepared well for this war, securing the "requisite political conditions"[5][5]. With Russia bribed not to interfere, Italy an ally, Britain - isolated, and Austria having just made peace with Germany, France was isolated from any help. This allowed Bismarck to send his troops in to defeat France and further secure the unification of Germany. Political Unification was destined to occur in Germany with or without the Zollverein, but the question was when and how?. The introduction of the Zollverein laid down a base and provided a path towards unification and it brought the German people and their cultural threads together. It was immensely important in economic development, and secured a Prussian dominance economically over Austria. Bismarck's diplomacy also played a significant role towards unification. His determination and character were assets in accomplishing his goals. If his true Junker sense of service towards the Prussian state was not present, Prussia would not have been as strong militarily nor economically. And without his determination to challenge Austria for military supremacy in Germany he would not have seen his giant step toward German unity. In many ways Bismarck's role as facilitator assured the eventual triumph. ...read more.