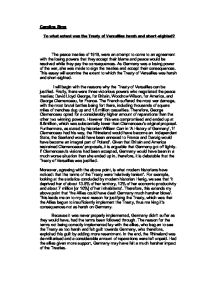 To what extent was the Treaty of Versailles harsh and short-sighted?

Caroline Sims To what extent was the Treaty of Versailles harsh and short-sighted? The peace treaties of 1919, were an attempt to come to an agreement with the losing powers that they accept their blame and peace would be resolved while they pay the consequences. As Germany was a losing power of the war, she was made to sign the treaties and accept their consequences. This essay will examine the extent to which the Treaty of Versailles was harsh and short-sighted. I will begin with the reasons why the Treaty of Versailles can be justified. Firstly, there were three victorious powers who negotiated the peace treaties; David Lloyd George, for Britain, Woodrow Wilson, for America, and George Clemenceau, for France. The French suffered the most war damage, with the most brutal battles being fort there, including thousands of square miles of trenches dug up and 1.5 million casualties. Therefore, George Clemenceau opted for a considerably higher amount of reparations than the other two winning powers. However this was compromised and ended up at 6.6million, which was substantially lower than Clemenceau's original proposal. ...read more.

On the other hand the previous point that the allies gave up on implementing the Treaty could aid the opposing view that the terms were short-sighted because the fact that Britain, America and Italy gave up shows the Treaty to be one of which was doomed to fail. Henig argues that 'the victorious alliance, which had defeated Germany and negotiated a set of peace terms, had crumbled away. It was this critical collapse, rather than the provisions of the peace terms themselves, which ensured that the Treaty of Versailles was never fully accepted or enforced. Negotiations at the peace conference exposed the divisions between the victorious powers and opened the rifts.' This agrees with the statement that the Treaty of Versailles was shortsighted as the allies weren't strong enough to initiate it's terms. Furthermore as stated in 'The Treaty of Versailles 80 Years On', 'Britain, the United States and Italy, had little stomach to enforce the resulting settlement on a resentful and protesting Germany.' France was the only power willing to punish Germany fully and Britain was more interested in securing military budget than aiding France. ...read more.

Historian Anthony Wood demonstrates the extend of its impact: 'the fundamental significance of Versailles was emotional rather than rational'. He goes on to state that it indicated the desire to achieve 'national humiliation of Germany' and that Germany must 'alone suffer as a result of the hated Treaty'. From evaluating the works of several historians and my own research, I have discovered that at the time of the Treaty of Versailles, it's terms were seen as emotionally and physically punishing on Germany, who was forced to give up most economic resources, pay mass reparations and lose population. However, I feel that the terms, although already quite harsh, could have been greater. Clemenceau could have had his way in the Conference and Germany as a country would have found it much harder to recover. The Allies could have collectively pushed the terms through so that Germany couldn't limit them, meaning the terms would have had a significantly harsher effect. Then again, unable to effectively enforce this treaty, a harsher one would not have been able to lead Europe any closer to peace. Therefore I feel the Treaty of Versailles was as harsh as it could be given the circumstances of disharmony between the powers, but Germany could have faced much worse. ...read more.

This is a well balanced essay that stays focused on the question asked and uses a good range of available historiography. At times, the author's ideas get lost compared to those of historians. Ensure these are always the driving force of an essay. 4 out of 5 stars.