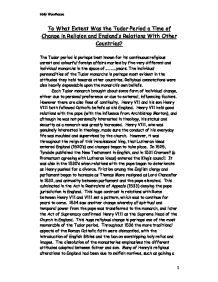 To What Extent Was the Tudor Period a Time of Change in Religion and England's Relations With Other Countries?

To What Extent Was the Tudor Period a Time of Change in Religion and England's Relations With Other Countries? The Tudor period is perhaps best known for its continuous religious unrest and colourful foreign affairs marked by five very different and individual monarchs in the space of.............years. The individual personalities of the Tudor monarchs is perhaps most evident in the attitudes they held towards other countries. Religious connotations were also heavily dependable upon the monarch's own beliefs. Each Tudor monarch brought about some form of individual change, either due to personal preference or due to external, influencing factors. However there are also lines of continuity. Henry V11 and his son Henry V111 both followed Catholic beliefs as did England. Henry V11 held good relations with the pope (with the influence from Archbishop Morton), and although he was not personally interested in theology, his status and security as a monarch was greatly increased. Henry V111, who was genuinely interested in theology, made sure the conduct of his everyday life was moulded and supervised by the church. However, it was throughout the reign of this 'renaissance' king, that Lutheran ideas entered England (1520's) and changes began to take place. ...read more.

1555 bought about a drastic change as Mary's devotion to Catholicism led to the burning of 280 Protestants (including Cranmer). By the end of Mary's reign it was evident that her strong catholic belief had been the force behind the Catholic restoration. The reign of Elizabeth 1 put England back into Protestantism (and Elizabeth herself as head of the English church), yet it was far more relaxed with heresy laws being repealed and replaced with a fine. The clergy were once again allowed to marry. One of the most significant changes was the fact Elizabeth was excommunicated by the pope in 1570. However, there is some continuity in that Henry V111 underwent a similar treatment. Elizabeth was far more tolerant of the Roman Catholic faith, and this was a totally new a refreshing concept introduced at the end of the Tudor period. Religion throughout the Tudor period switched between Protestantism and Catholicism depending on the monarch, and this was especially noticeable around the middle of the Tudor age. However one may argue that the changes, although frequent, were only between two religions, and therefore there remained an element of continuity. Foreign affairs throughout the Tudor period were also dependable on the character of the monarch as well as outside factors and European monarchs. ...read more.

Mary's reign was fairly continuous with that of her predecessor, in that she was back at was with an old enemy, France, and that she had used the same technique of her grandfather (Henry V11) when it came to practical marriages. Elizabeth 1 continued her grandfathers' policy of a defensive foreign policy. Her ultimate policy was security against foreign invasion. In 1572 she made a defensive alliance with France in the Treaty of Blois. In 1585 the Anglo-Spanish was started which went on until 1604. Elizabeth continued volatile relations with both England's old enemies, yet unlike many of her predecessors she avoided war at all costs, and upheld a defensive foreign policy. The Tudor period was full of change yet there remained an element of continuity in that England was with or against her two main European counterparts, France and Spain. Nearly all the monarchs married for practical or diplomatic reasons, and most of them were defensive in their polices. However, it is the individual personalities of the Tudor monarchs that adds change throughout the Tudor period. Henry V111 was very aggressive, striving to be 'the warrior king' and therefore saw many wars fought, and treaties with different sides signed. The rest were more defensive. Like foreign policy, religion swapped back and forth between Catholicism and Protestantism, only adding more change to the Tudor period. Holly Woodhouse 1 ...read more.